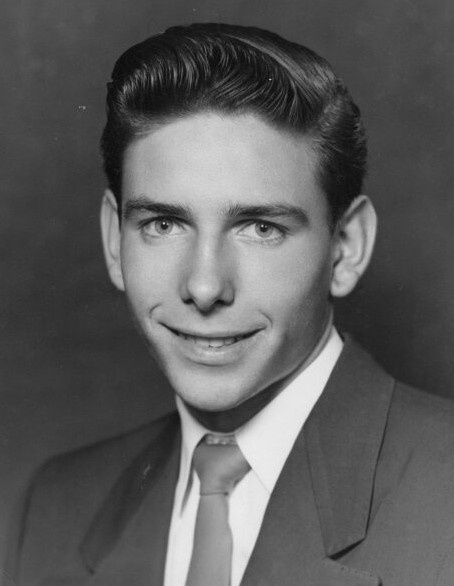 Peter John Gordon Smalley peacefully passed through the veil into the next stage of his eternal journey on December 20, 2021.  Born on August 25, 1938 in Stockton, California, he grew up in the Bay Area.  He cruised Main Street with his high-school sweetheart, Charlotte Hope Harden, in his ’37 Mercury Coupe like Harrison Ford in “American Graffiti.”  Pete joined the United States Air Force in 1956 where he learned to be an electrician.  He and Charlotte were married on March 20, 1957 and immediately started having children.  By 1971, they had 10 kids, including two sets of twins.

While stationed in Texas for extended Air Force training, Pete was introduced to the Restored Gospel of Jesus Christ by a fellow Airman.  When he enthusiastically told Charlotte over the phone about what he had found, she patiently expressed here disapproval, saying something to the effect of: “If you join the Mormons I won’t be here when you get back, and neither will your two sons!”  Confident in his wife’s love, and no doubt familiar with her good-but-stubborn heart, he was baptized a member of the Church of Jesus Christ of Latter-day Saints while still in Texas.  Charlotte did indeed stand by his side and eventually joined the Church as well.

Pete was honorably discharged from the Air Force in 1960, opening the next chapter in their lives.  They lived in several locations, eventually moving to Utah where Pete secured work at Hill Air Force Base.  He worked at Hill as a civilian electrician; first wiring aircraft, then as an instructor, and finally as a curriculum developer for other instructors. They built a new home in Hooper, UT doing much of the work themselves.  The building inspector was both perplexed and impressed to find that the electrical wiring had been done with a level of precision typically reserved for military aircraft.

Pete was extremely competent at fixing vehicles, his favorite being the F-4 Phantom multi-role fighter jet.  His talents extended to maintaining the veritable fleet of vehicles required to transport their large family throughout the years.  He passed his knowledge of the art of car repair on to several of his children, inspiring some to go into related careers such as welding, plant maintenance, and mechanical engineering. The same DIY attitude migrated into other aspects of their family life, including home appliance repair, musical instrument repair, and (for better or for worse) minor medical emergencies. In short, when they made Pete, they broke the mold.  But then he fixed it! (Although the door didn’t quite close all the way and it always sort of pulled to the left after that.)

Several of Pete and Charlotte’s children and grandchildren served as missionaries for the Church in fields all over the world, including Denmark, Colorado, Chile, Pennsylvania, Switzerland, Texas, California, Spain, Slovenia, Australia, Panama, Nicaragua, Canada, and Wisconsin.  Several served their country in the U.S. military, including the Navy, Army, Marines, and Air Force.

In 1991 Pete and Charlotte moved from their home in Ogden to Lake Point, Utah where they spent the rest of their lives, serving a service mission and two family-history missions for the Church of Jesus Christ of Latter-Day Saints.  On the other side of the veil Pete joined his wife, his parents, and his brother.  Pete is survived by his sister Shirley, his children Pete (JoD’An), Chris (Shauna), Nephi (Laura), Jacob, Larry (Susan), Cheri Egbert (Jay), David (Rebecca), Omni “Bobby” (Tiffiny), Joy Flitton (Don), Troy (Emily), 34 grandchildren, and 14 great-grandchildren.

To order memorial trees or send flowers to the family in memory of Peter Smalley, please visit our flower store.