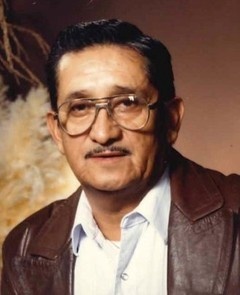 Amador was born in Oxford, Colorado to Manuel and Lupe Romero Lujan and the third child of nine, four brothers and four sisters.  He worked construction for many years in Durango, Colorado, moving to Salt Lake City in 1952 working at Tooele Army Depot Maintenance Division as a foreman, retiring with over thirty years.  He was a very hard worker where he was thought very highly of.
Married Stella Marie Talamante and together they had seven children, Bernadette (Albert) Morfin, Connie (Oscar) Becerril, Lucille Stoss, Theresa Lujan, Cindy Albor, and Amador Jr. all of Salt Lake City, Utah.  She preceded him in death.  He had 22 grandchildren and 43 great grandchildren and 7 great great grandchildren.
Married Diana L. Daoust with this union came David (Krystal) Daoust and two grandchildren Michael Daoust of Tooele, Utah and Jeffery Daoust in Montana.  Sharing over forty three wonderful years together.
He loved cooking, the outdoors, an avid hunter, fisherman, and camping, gardener, and dancer and loved traveling all over the USA. He had many loving pets which he spoiled with no problem.  He was a member of St. Marguerites Catholic Church and the Fraternal Order of Eagles Lodge # 164.
We want to thank the staff at Hunter Hollow Skilled Nursing Facility for all their support and care.
Preceded in death his parents, brothers Gilbert, Frutoso and Manuel Lujan, sister Frances Sandoval, and a son.  Survived by sisters Molly Lujan, Louise Romero, and Cimona Martinez of Durango, Colorado.  Brother Juan Lujan Salt Lake City, Utah.
In lieu of flowers please donate to Huntsman Cancer Center in his name. Funeral Mass will be 10 am Friday December 2, 2016 at Our Lady of Lourdes Catholic Church, 2864 S 9000 W, Magna. Visitations will be 5-7 pm December 1, 2016 at Peel Funeral Home, 8525 W 2700 S, Magna and 9-9:45 am at the church on Friday. A Rosary will be recited 7 pm December 1, 2016 at Peel Funeral Home. Interment: Salt Lake City Cemetery. Condolences: www.peelfuneralhome.com

To order memorial trees or send flowers to the family in memory of Amador Lujan, please visit our flower store.