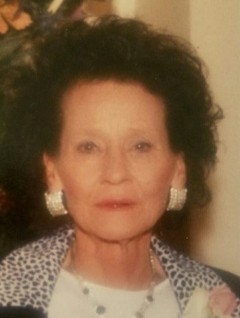 On April 7, 2018 our “Mother, Grandmother and Great-grandmother”, Anna, passed away peacefully, surrounded by her children.  Anna was born November 14, 1933 in Salt Lake City to Carl and Ruby Warath.  She had four brothers; Carl Jr., Robert, Reid, and Neil.

December 29, 1951, Anna married the love of her life, the “Greek artist “and a WWII veteran, Harry Mamalis.  Together they raised ten children.  She loved Greek cooking, music, and its culture.  One of her favorite memories was traveling with her family to the motherland, Greece.  She loved writing (she was very good at it), traveling, going to Wendover, and golfing (with her sweetheart, Harry), getting together with her kids for the holidays, watching Hallmark movies, the Olympics, and game shows.  She always had a pot of coffee and a bite to eat for visitors.  Anna liked to stay busy and was very independent.  In her younger years, she worked at Tooele Army Depot, and later in life, besides being a homemaker and raising her ten kids, she worked part time at Delton Bowling Lanes and the Copper Gold Golf Course.

To order memorial trees or send flowers to the family in memory of Anna Mamalis, please visit our flower store.