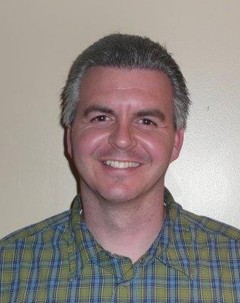 Magna, UT- Our loving Husband, Father, Son, Brother and Uncle Barry Leon Rodriquez, Jr. passed away peacefully in his home surrounded by family on May 20, 2015 after a battle with Melanoma. Barry was born on May 3, 1974 in Camp Lejeune, Onslow, NC to Barry Rodriquez and Joyce Bailey.  He spent most of his childhood in California and Washington before moving to Magna Utah during his sophomore year in high school.  He graduated from Cyprus High School in 1992.  He served an LDS mission to the California San Diego Mission from 1993-1995. He married the love of his life and sweetheart, Stephanie Bird on September 22, 1995 in the Salt Lake City LDS Temple.  They have been blessed with two amazing children, Connor Thomas (15) and Brindley Jane (12).  They made their home in Magna.  Barry was a very faithful member of the LDS church.  He served as Elder’s quorum pres., High Priest Group leader, Young Men’s President and in the Bishopric just to name a few.  Barry loved serving our Heavenly Father and the youth.  He had a zest for scouting.  He held many position in the Boy Scouts and helped many young men on their road to earning their Eagle, including his own son.  Barry loved camping, fishing, gardening and had a love for genealogy. He was currently employed at Kuehne + Nagel as an Air Export Supervisor. He loved his job and those he worked with became an extension of his family. He fought a valiant battle against cancer with a positive outlook and a hint of stubbornness. He is survived by his wife, two children, and parents, sisters Pam, Michelle and Jana, along with his in-laws, Tom and Sanna Jane Bird and sister-in-laws Teri Livingston and Staci Carson and many nieces and nephews.

The family would like to express their appreciation for all the doctors, nurses and staff at Huntsman Cancer Institute, especially all those in clinic 2D.

In lieu of flowers, donations can be made at Cyprus Credit Union.

To order memorial trees or send flowers to the family in memory of Barry Rodriquez, please visit our flower store.