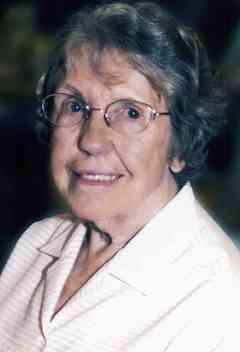 Beth Louise Anderson Fredrickson, age 91, passed away in her home on Thursday, November 10, 2016 from causes incident to her age and dementia.

Beth was born on June 26, 1925 in Ft. Union, Utah, to her parents, Henning Anderson and Ruth Matilda Johnson Anderson. She was born into her mother’s large extended family — the Johnsons, centered in the Union and Midvale area. They must have been waiting for her, because she was always valued and loved and cared for, and spent most of her life surrounded by her aunts and uncles, and cousins from her generation and their children. Her dearest friend for most of her life — Truth Johnson Coon — was also her cousin.

Her father, Henning, emigrated from Sweden as a young man. He worked as a logger, and farmhand, and a soldier (during WWI), and a housepainter, and a farmer before eventually becoming a police officer, and ultimately Murray City Police Chief.

Her mother, Ruth, worked even harder — as a farmwife and a mother. In her ‘spare’ time, she took in work during the Great Depression to help make ends meet. During the war years, her mother served as a materiel truck driver at the old Camp Kearns, while Beth cared for her younger brothers and kept the household running (and also attended high school) and held a job of her own.

Beth had two younger brothers, Von Anderson and Lynn Anderson she loved very dearly. Her brother Lynn gave her one of her greatest gifts: her love of music. Both of her brothers would often volunteer — during very difficult times — to go without, so that Beth’s parents could continue to afford her piano lessons.

Beth was educated in the Murray school system and graduated from Murray High School. (She was very proud Murray Smelterite, and couldn’t ever understand why they’d take a perfectly good, unique name and change it to something as innocuous a ’Spartans’.) She loved school and learning; she was almost a one-issue voter for the rest of life. Anyone who said they wanted to do more for education could count on her vote.

As a young woman, Beth worked for many years at the old John Deere Tractor dealership in Murray, as well as at the Mountain Bell Exchange on State Street. She had a very active social life, and church life, and work life, and family life; but, well, something was still missing. Then one day she found her one true love standing in plain sight across the street from her parents’ house.

Beth saw a handsome sailor standing there, and has always said she felt a tingle, and then got to work reeling him in (poor guy didn’t have a prayer). He’d spent a 20 year career in the U.S. Navy and was about to retire, and had come to stay with his father across the street from Beth’s house for a few months while he transitioned to civilian life. Beth and her sweetheart and husband, Woodruff E. (Woody) Fredrickson, were married on August 11, 1955 in Murray, Utah.

Beth and Woody settled in the Taylorsville area in a brand-new post-war home, and decided they should participate in the baby boom. They had four sons: Tim, Mark H., Brent E., and Von R. Fredrickson. It was a lively time. Their neighborhood had so many small children running around, it was hard to keep them straight and figure out which ones belonged to which home. Beth became a full-time mother and has always said this was the happiest time in her life.

In 1966, Woody passed away. Beth became a single mother to four small boys. It was a very difficult time for Beth, but she got on with it, and got busy and started working away. She returned to the workforce, working for Zions Bank. Beth received a lot of help – which she’s always felt humbled by – from her parents, and her family members and dear friends, and her neighbors, and her ward members. It was always a struggle, but things began to get better. Her oldest son, Tim, eventually was old enough to go to work and contributed his wages to the household. And Beth got a much better job working for Salt Lake City School District.

Beth loved her job and she loved her co-workers. She particularly enjoyed her positions in elementary schools and all of her interactions with school kids and their parents. She finally got a position in the District Offices – for better pay to provide for her own children – but she always missed those years she spent in elementary schools.

Beth loved a lot of people, and always felt loved by a lot of people (which always surprised her). Throughout her life, she always had one or two friends she was particularly close to, most of whom she outlived – Shirley, Truth, Ona Beth, Jean, Susie, Helga. Two of her treasured friends survive her – Mae Sudoko and her dear friend, Sue Smith.

Beth loved her community, and her neighbors, and her ward members. She loved fitting in with people, and collaborating with people, and participating in things, and contributing what she had to things. Once she found her place, and her people – her home in Taylorsville – she remained there for the last 61 years of her life.

Beth loved the Lord. She was a faithful, earnest member of the LDS Church for her entire life. Her faith was tested, many, many times by events in her life (and by some of the people in her life), but it never waivered. Beth was a member of Taylorsville First Ward. She received all the endowments and blessings of the Church, and was sealed to her husband, Woody, in the Salt Lake Temple.

Beth outlived many of her loved ones, but she’s survived by her children, and by three grandchildren, Eryn, Tyler and Spenser, who were very dear to her heart. She’s also survived by ’The Coon Girls’ (poor Beth, surrounded by all those boys; you were as close to daughters as she ever had), and many relatives who – in the modern way – are scattered to the winds.

A graveside service will be held for Beth on Wednesday, November 16, 2016, at 1:30 p.m., in Murray City Cemetery (5490 South Vine Street, Murray, Utah). Services will be provided by Peel Mortuary, and will be conducted by Bishop David Jones.

Thank you to Silverado Hospice – and special thanks to Julia, Terra, and Malisa – for their very kind care and for helping Beth keep her dignity right up until the end. Also, thank you to Neighborhood House, and Kelsi and Mackenzie, for going over and beyond. Hello to everyone at Taylorsville Senior Center. Beth has really missed you and wanted to get over to see you. She loved you all and the things you did together.

To order memorial trees or send flowers to the family in memory of Beth Fredrickson, please visit our flower store.