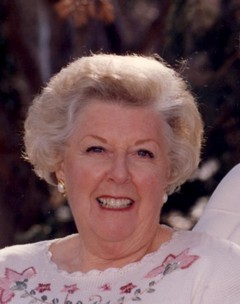 Mom returned to our Heavenly Father this Wednesday, August 17, to be reunited with her eternal husband Eugene J. Catten and all of her heavenly family. Her passing is truly met with mixed emotions by her children, grand children, great grand children, and her many friends. We will miss her deeply, but we will be forever grateful for the love and happiness she brought to our lives, and blessed in the knowledge that she is now free of the debilitating Alzheimer’s disease that plagued her for many years. We know that her body, mind and spirit are again reunited and at peace.

Mom was born in Garfield, Utah on March 17, 1930 (St. Patrick’s Day) to Clarence and Elizabeth Henry. Mom said that she must have been born on a lucky day as she had a fun and carefree childhood in Garfield and Magna, with an abundance of wonderful friends. She also expressed her luck and Heavenly Father’s blessing to have found her eternal companion in Gene Catten. They were married on November 2, 1949 in the Salt Lake Temple, and over the next fourteen years they were blessed with the arrival of four active boys. Mom and Dad never missed a single event or activity that their boys were involved in, and there were many. She often said that she always wanted a girl, and was sure that her youngest son, Brad, was going to be that daughter. But even though Mom didn’t get her daughter, she knew that her blessings continued with the love of her daughters- in-law, and her many grandchildren and great grandchildren.

After Dad’s passing on April 3, 1981, Mom was again blessed to find a wonderful and caring man, Ranald (Ray) Woolley, to be her companion. That was so especially important and difficult after Mom was diagnosed with Alzheimer’s; Ray was always at her side to give her comfort and support until his passing on June 21, 2015. Mom and Ray were married on June 1, 1985, and took every opportunity to travel in their little motor home. They went to the family cabin in Heber as often as possible, and for more than 20 years spent the winter on the warm beaches of Puerto Penasco, Mexico. They served a mission for the Church of Jesus Christ of Latter Day Saints, and touched many lives and made many friends during their time in the New York Rochester Mission. Mom served in many positions in the Church and was always willing and happy to serve others in any way. One of the great joys for Mom and Ray was making, and giving away, chocolate candies and pecan logs. We are all much sweeter and heavier for that.

Mom also loved Ray’s children as her own: Brent (Danielle) Woolley, Mark (Dana) Woolley, and Kim (Madelian) Woolley. With the combined families, Mom and Ray have 22 grandchildren and 36 great grandchildren. On many occasions Mom requested a simple graveside service. To honor that request, there will be a graveside service held at 11 am, Tuesday, August 23 at the Valley View Memorial Park, 4335 W. 4100 So., West Valley City. In lieu of flowers, the family asks that you make a generous donation to the Alzheimer’s Association (alz.org/utah/). We know that will make Mom very happy.

To order memorial trees or send flowers to the family in memory of Betty Woolley, please visit our flower store.