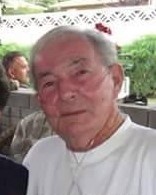 John William “Bill” Hardy passed away April 23, 2015 in Salt Lake City, UT. Bill was born November 26, 1935 in Salt Lake City to Kenneth and Genevieve Butte Hardy. He moved to Garfield, UT where he lived until he graduated from Cyprus High School. He married Georgia Royal June 11, 1965 and helped raise two sons, Frank and John. Bill served in the US Army, spending most of his two years in Germany. When he came home he went to work for Kennecott Copper and retired after 33 years, then worked for Tooele Ordinance. He was an excellent carpenter and along with his family built a beautiful cabin in Pine Mountain above Oakley, UT that was enjoyed for 22 years. Bill enjoyed fishing in Alaska and the Green River in Wyoming, and hunting with family and friends. One of his fondest memories was training his black lab, Misty and running her in AKC field trials, where they won many 1 st and 2 nd place ribbons. Bill is survived by his partner, Georgia; sons, Frank and John (HannahGay); 6 grandchildren, Mindy (Damon), Jennifer (Austin), Janelle, Brandon, Heather, and Amanda; 5 great grandchildren, CheyLynn, Aleesa, Boston, Chase, and Hudson; and many favorite cousins, nephews, nieces, and friends. Preceded in death by parents; and sister, JoAnn Sheldon.

A very special thank you to the staff at the Veterans Medical Center and all the family and friends for their care and concern during Bill’s illness.

To order memorial trees or send flowers to the family in memory of Bill Hardy, please visit our flower store.