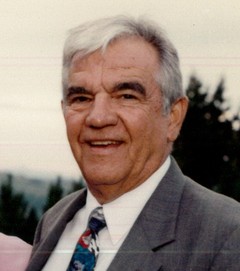 Billy (“Bill”), best known as “Dad”, grew up on a farm in Magna, Utah, in a "Big Greek Family."  He was one of 7 brothers, a sister; and Ma and Pa.  Many remember Dad, from the early farm days, and then from his life in the “big” white house on the corner of Buccaneer Drive.  Dad was loved by all that came to know him. He was the youngest of his brothers and sister; his passing marks the end of an era that was less busy, simpler, and wholly dedicated to family. Attending Cyprus High, his friends said he was gregarious, protective, a great friend, loving, and a fighter.  Sports were a big part of his life, he was the quarterback on his Cyprus team, and went on to play football at Westminster College. He was drafted into the Army and served our country in Korea where he also played football on an army regiment team.  Coming home from the army, he eventually found his true love upon stepping into Falvo’s Market where he laid eyes on, and was love-struck by Betty Jane Pasternak, a young beauty queen. They fell in love, married in Our Lady of Lourdes Catholic church and quickly started their family.  Their 3 children became the light of his, and Mom’s life.  His children will tell you that their Dad taught them love and was always there for them.  On New Year’s Eve 1998 his oldest son, “Teddy” was diagnosed with ALS/Lou Gehrig’s disease, at which time Dad quit his job, and gave all he could to care for his beautiful son.  Though the last 16 years were challenging they were filled with invaluable lessons, a lot of laughter, and immeasurable amounts of love.  The wonderful memories are countless.  Dad had 4 grandchildren that were blessed to know him well. The love and support he showed for his own children carried on to his grandchildren - he was their biggest fan. He also thought of his nieces and nephews as his own, supporting and loving them with all he had in his heart.  Dad came to know Jesus Christ as his Lord and Savior in 1988, his relationship with Jesus was one he warmly shared with some, and demonstrated by his love to many.   We know there was a “Klekas family reunion” filled with rejoicing the day Dad entered into his rest and found the peace he always prayed for.  He is certainly rejoicing with the Lord and all the loved ones that went before him.  Dad is preceded in death by his loving “Ma and Pa” - Wilma and John; brother, Colonel Louis Klekas; sister, Irene; and brothers, Frank, Mike, Gus, Nick and Harry. He will be missed by his loving wife, Betty; children: Ted, Billy (Jennifer), Mary (Tom); grandchildren: Payden, Ethan, Grace, Whitney; Great Grandson, Dakotah; and many other family members and friends.  The family extends special thanks to: Robert Clarke, Carlos Cruz, Sarah Sibson, and all the Dr.’s, nurses, and staff at Promise Hospital. The legacy and heritage we, as a family, have inherited is one of unconditional, selfless love, for which we are truly thankful (εὐχάριστος, ον).   Thank you “Dad”; thank you “Wamps”; thank you” Uncle Bill”; thank you “Bill”; and from Mom, “Thank you Billy, thank you my Love.”

In lieu of flowers the family is accepting donations. Donations can be made in the name William J Klekas and given to the family or to the mortuary. You can also mail any donation t the mortuary or call by phone.

To order memorial trees or send flowers to the family in memory of Billy Klekas, please visit our flower store.