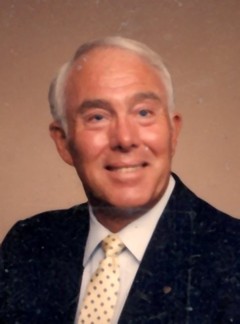 Blaine Albert Barnes “Barney”, 87, returned to his Heavenly Father on February 25, 2018. He was born April 21, 1930 to Bernard Albert and Hilda Matti Barnes in Salt Lake City, UT. He was reared in the avenues and graduated from East High School where he excelled in sports and choir. He went on to the University of Utah and was a member of the football team when drafted to serve in the Korean conflict.

He married Patsy Ann Eccles on September 4, 1953 in the Salt Lake LDS Temple. They raised their five children in Magna, UT where he coached little league baseball and youth football. Regrettably, they were later divorced, and Pat passed away March 18, 2016.

Barney was a dedicated public servant retiring from the Salt Lake County Sheriff’s Office after 30 years of service. He was also a defensive driving instructor. After retirement he worked as a security guard at Kennecott Copper. He was a faithful member of the Church of Jesus Christ of Latter-Day Saints and served as the ward chorister, choir director, clerk/secretary. Barney was a proud member of the University of Utah Alumni Association and the Crimson Club. “Go Utes”

He is survived by daughters, Wendy (Que), Paula, and Jenifer; son, Jeffrey; brother, Lee (Evelyn); 8 grandchildren and 10 great grandchildren. He was preceded in death by former wife, Pat; his parents; son, Scott; and granddaughter, Kavie.

Max, as well as the IMC Heart and Lung Unit for their friendship, kindness and TLC.

To order memorial trees or send flowers to the family in memory of Blaine Barnes, please visit our flower store.