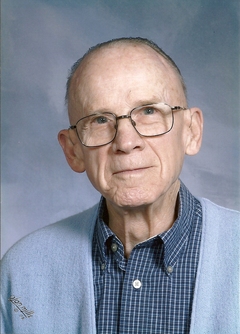 Blair Herschel Sutton, age 93, passed away peacefully on September 24 in Sandy, Utah. Blair was born on 11 January 1923, the son of Herschel Shepherd Sutton and Julia Ellenetta Neuhausen. He was the oldest of three children. He married Mildred Ruth Coon on 10 September 1945 in Jacksonville, Florida. Their marriage was later solemnized in the Salt Lake Temple on 7 December 1950. He attended schools in Magna, Utah, graduating from Cyprus High School in 1941. He lived for 26 years in Sunnyvale, California; returning to Utah in 1992.

Blair was preceded in death by his wife, Ruth; a son, Robert; his sister, Julia Sutton Clegg, and brother, Phillip Sutton. He is survived by his children, Steven, Patricia (Roberts), and Nancy; eight grandchildren, and eight great-grandchildren.

Following graduation from High School he enrolled in the Mechanical Engineering program at the University of Utah. In September 1943 he started active duty in the United States Navy, training as a dive bomber pilot. He was honorably discharged from the Navy in November 1945. He then resumed his studies at the University of Utah, graduating with a Bachelor of Science degree in 1948. During his professional career he worked for Kennecott Copper, the Scott and Beecher architectural firm, Sperry Corporation, and Davy-McKee Corporation. He retired in 1988.

Blair was an active member of the LDS church. He served in various church callings including Ward Clerk, Young Men’s president, Ward Missionary, and a faithful home teacher. He served at the Oakland Temple and most recently in the Jordan River temple until health issues prevented further service.

His children and grandchildren will remember his dry sense of humor and his love for his family. He was the rock upon which they depended for strength, inspiration, and guidance. They will remember most the grace and dignity with which he accepted the infirmities that limited his mobility the past few years.

Funeral services will be at 11:30 am on Friday, September 30, at the LDS Church chapel located at 1500 E. 8600 S., Sandy, Utah. A viewing will be held prior to the service from 9 am to 11 am at the same location. Online condolences: www.peelfuneralhome.com

To order memorial trees or send flowers to the family in memory of Blair Sutton, please visit our flower store.