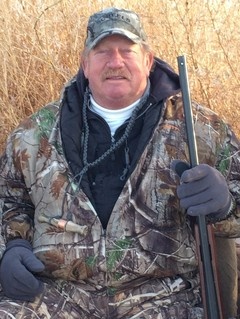 Brice spent his early childhood in Stockton, Utah before the family moved to Magna when he was 9.  As a child Brice loved sports and scouting where he excelled in baseball, basketball and football.  He earned his Eagle Scout on October 13, 1961, an accomplishment he was extremely proud of.

He attended Cyprus High School from 1962 to 1965 where he graduated, lettering in all 3 sports and earned a football scholarship to Snow College.  Brice served in the United States Army Reserves for 7 years where he was a Maintenance Sergeant.  He became an expert marksman in rifle and pistol shooting.  He proudly worked at Kennecott Utah Copper for

32 years, Conveyors and Equipment, Tintic Utah Metals and then last retiring from The Franklin Company in 2013 where he served as a Safety Coordinator for Rio Tinto.  Brice loved to be in the outdoors either hunting, fishing or camping.  If he wasn’t in a goose blind or drowning a worm, you could find him on the mountain chasing elk, deer, or cows.

Brice’s greatest accomplishments were his children and grandchildren in which he instilled his life values.  He was very proud of what they have accomplished and the amazing people they have become.  Brice will truly be missed.  The world has lost an amazing dad, grandpa, brother, uncle and friend.

Preceded in death by his parents and mother of his children LeMei Triplett.

To order memorial trees or send flowers to the family in memory of Brice Hamp, please visit our flower store.