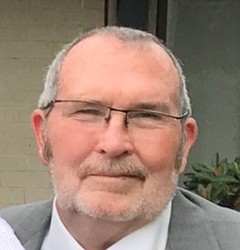 Embraced by the love of our family, Carl William Duckworth, our husband and boyfriend, dad, grandpa, son, brother, uncle and friend, leaves his earthly body behind and is reunited with his father, sister, Sandee, grandparents, many of Sue’s family members and our Heavenly Father, on sunny Tuesday, May 1, 2018. Carl grew up in Magna, in the days when you could walk home from a late night movie at the Gem Theater and not have to worry about safety or being out past curfew. He had the perfect childhood, thanks to his loving his parents, Bill and Joan Duckworth. Carl had the best of friends growing up; Kevin Aoyagi, Neil Bawden, Rex Christensen, Russ Smith, Gary Robinson, Kaye Riley Ogden, Sue Beck Marsing, and so many others. Riding motorcycles, working on the ’56, working at St. Regis and cleaning grease out of his fingernail were some of the ways he spent his youth. In 1971, he met Sue Taylor, the Queen of the World and 1973 they were married. Fast forward, two marriages later, to the same Queen, four children and eight grandchildren later, here we are. Carl retired from Kennecott Copper, worked for USW Local 392, and served 10 years in the Utah House of Representatives, where he made many lifelong friends. The past 63 years have been a journey filled with ups and downs in which we would never have survived without our loving family and friends. In 2008, our marriage was solemnized in the Salt Lake Temple, thanks to the love and care of our good friends Kelly and Tammy Harman. Having knowledge makes life and death so much easier and we are grateful for that. Carl will be deeply missed by his girlfriend, Sue, children; Melissa (Shane) Mortenson, Brock (Kari), Tristan, Kellen (Robert) Mullen and grands; Tenille, Jaron, Mason, Madison, Tyson, Melece-Cooky, Blade and Drake mother, siblings; Bobbie (Terry) Pollock and Kent. Dr. Richard Frame, the entire staff at Utah Cancer Specialists as well as Dr. Greg Miller have been a huge part of the reason we have had so many more good years with Carl. Brighton Hospice has made the past few months bearable. Our love and appreciation goes to all of them.

To order memorial trees or send flowers to the family in memory of Carl Duckworth, please visit our flower store.