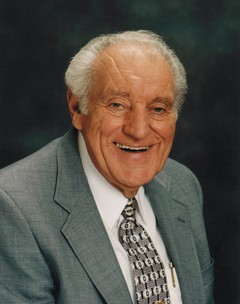 
.
Charles (Chick) Paris passed away peacefully at home during the night of natural causes on July 29, 2018.  He was born December 13, 1925 to John C. and Jennie D. Paris in Carbondale, Colorado and moved to Magna at the age of 12. Chick graduated from Cyprus High School in 1944.  After graduation he enlisted the United States Marine Corp on June 21, 1944, serving in the Pacific during World War II with the 5th Marine Division and was discharged July 31, 1946.  Upon his return to Utah he attended the University of Utah.  He married wife Vickie Andrus February 22, 1947 and together they had 3 children.  His wife Vickie passed away September 11, 2000.
In 1960 Chick opened Paris Insurance Agency with Farmers Insurance Group and after a successful career retired May 31, 2016.
Chick joined the Salt Lake County Sherriff's Office in 1954 then transferred to the Salt Lake County Fire Department where he was Chief from 1970 to 1980.  As Fire Chief he was an innovator by instituting the first Paramedic program as well as expanded ambulance service in the Salt Lake Valley.  Also, five volunteer  stations were converted to full time and he built 4 new fire stations, retiring after 25 years.
From the 1960's Chick was involved with the Magna Community Council, Magna Chamber of Commerce serving as President and many other public service organizations.  In 1970 he was elected Trustee to the Magna Water Company and was reelected 1976, 1982, and 1988.  Other activities include State Commander of the Veterans of Foreign Wars, American Legion, Fraternal Order of Eagles, Elks Lodge #85 and International Footprinters Association.
Chick along with Gene, Don and Jay Fullmer moved the Rocky Mountain Golden Gloves Boxing Club franchise from Denver to Salt Lake City in 1960 and it included the states of Utah, Colorado, Idaho, Wyoming and Montana.  Chick has been Executive Director since 1981 and continued to operate in that capacity until now.  He was President of the National Golden Gloves and is currently Treasurer of the National Golden Gloves being inducted into the Hall of Fame in 2003.
Chick is survived by his 3 children, John (Zelma), Linda (Herbert) Jenkins and Perry; grandchildren, Cindy (Shannon) Dorrance, Marty (Jen) Paris, Allison Jenkins, Brandy Jenkins, Jeremy (Jenn) Jenkins, 5 great grandkids and dear friend Lan.
Funeral Services will be held Saturday August 4th, 2018, 11:00 am at St. Anna Greek Orthodox Church, 3015 E Creek Road (8000 S) Cottonwood Heights.  Visitation will be held Friday August 3rd, 6:00-8:00 pm at Peel Funeral Home, 8525 West 2700 South, Magna and 10:00-10:45 am at the church.  A short prayer service will be conducted at 7:00 pm.  Interment will be at Valley View Memorial Park following church service.  In lieu of flowers pleasemake donations to Rocky Mountain Golden Gloves, 3688 West Pheasant Hollow Lane Riverton, Utah 84065.  The family would like to express their gratitude to the Unified Fire Authority for their help and support. All are invited to a luncheon following services at the Webster Center, 8952 W Magna Main St (2700 S), Magna.Condolences: www.peelfuneralhome.com

To order memorial trees or send flowers to the family in memory of Charles Paris, please visit our flower store.