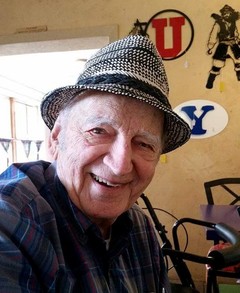 On May 29, 2016 our beloved dad, grandpa, great grandpa, brother, uncle, husband and friend, Darwin Anthony Spolyar passed away peacefully. Born August 25, 1923 in Detroit, Michigan to Ludwig Spolyar and Leona Tomay Spolyar. On December 19, 1969 he married the love of his life, Constance Aileen Johnson.

Dad served in the US Navy and was a World War II Veteran. After receiving a Master’s Degree from San Jose State University he worked at Lockheed until he retired in 1988. Dad enjoyed writing his “yearly letters”, wearing one of his many hats, word searches, traveling to Hawaii, spending time with his family and friends and especially his dark chocolate. Dad lived happily at The Beehive House in Magna for 3 ½ years. Thanks for all of your love and care.

We will miss his sense of humor, and his gentle, loving, generous nature.

To order memorial trees or send flowers to the family in memory of Darwin Spolyar, please visit our flower store.