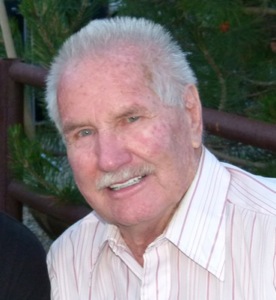 Don C. Willard, 85, passed away unexpectedly at his home. Don was born February 25, 1929 in Provo Utah to Charles Samual and Anna Carter Willard.  He married his beautiful wife Barbara Rushton on June 1, 1949.  Don was a loving husband, father, grandfather, great-grandfather, brother, and friend.  His number one priority in life was his family.  Don and Barbara enjoyed traveling with the Good Sam's and spending time at their property in Beaver Dam.  His hobbies included:  golfing, bowling, and horseshoes.  Don played basketball and graduated from Cyprus High School in 1947.  He enjoyed a long and successful career at Kennecott Power Plant.

Click here to listen to a recording of the service
To order memorial trees or send flowers to the family in memory of Don Willard, please visit our flower store.