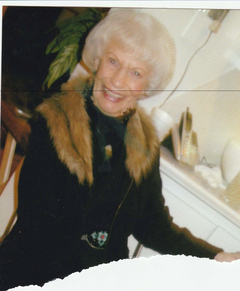 Dorothy Louise Cash Camp, 88, passed away May 8, 2015 at her home in West Valley surrounded by her family. She was born Oct. 10, 1927 to Ardith and Louise Cash. Dorothy married Tony Mora in 1947 and the couple had 3 children; Toni Jean, Joseph and Christy (all deceased). Toni Jean and Joseph in a tragic accident in 1951 and Christy in 1986. Dorothy and Tony later divorced. In 1960 she married Ted (Beaver) Clark until his death in 1976. Later marrying Gary Camp in 1984 until his passing in 2012. Preceeded in death by her husbands; her parents; 3 children; several brothers and sisters; nieces; nephews and cousins.

Throughout her life Dorothy enjoyed many activities which included horseback riding, boating, bowling and spending time at her vacation home in Flaming Gorge. Dorothy loved being a grandmother, great-grandmother and great-great-grandmother. She loved all her grandchildren unconditionally, unable to see any of their flaws or misdoings, each one was perfect in her eyes. She opened her heart and home to family and friends without hesitation but friends and family were not the only ones she opened her heart to.....her dogs always had a special place in her heart. They were like her children but with much more hair.

Dorothy touched many people throughout her life and will always be in our hearts and remembered as a loving wife, mother, grandmother, aunt, sister, friend and just a real classy lady.

A memorial service will be held on May 14, 2015 at Peel Funeral Home, 8525 W 2700 So. Magna at 2:00 pm. Visitation one hour prior to memorial service. Private Internment. Online condolences: www.peelfuneralhome.com

To order memorial trees or send flowers to the family in memory of Dorothy Camp, please visit our flower store.