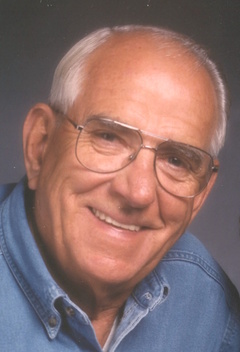 Parley Edward (Ed) Bills slipped away January 4, 2016 surrounded by his loved ones. Ed outlived all other Bills men by reaching the age of 86, a feat he never dreamed of accomplishing.

Ed was born in Soldier Summit, Utah on September 30, 1929 to Parley Dwain and Nellie Myrtle Bills. He married Carma Jane Cammans on January 21, 1950. They were married 61 years.

Ed spent his youth in Soldier Summit and Salt Lake City. He graduated from South High School and earned a football scholarship to Mesa Junior College in Grand Junction, Colorado. Although Ed loved playing football, he didn’t love the rigors of the classroom. It was on a blind date that he met and later married Carma. For a time, the family lived in Las Vegas, Nevada where Ed worked for Carma’s dad at his carwash business. Later, they moved to Magna, Utah where Ed landed a job with Kennecott Copper-Utah Power Plant; Kennecott was Ed’s second home. He met many life-long friends, and he enjoyed his job and the camaraderie of his fellow workers. There was never a challenge Ed was unwilling to tackle, and he took pride in his dedication to his trade.

Our dad was passionate about many things. He was an avid fisherman; he spent countless hours “wetting a line” in the rivers and lakes of Utah, Wyoming, and Montana. He was a voracious reader, a baker extraordinaire, a lover of music, and he had a fondness for a cold Mickey’s Big Mouth, lovingly referred to as his “hand grenades.” Ed was also a fixture at Cyprus High School athletic events, and he was known to spend many free Saturday mornings watching Cyprus Little League football. Additionally, he followed many family and friends in their athletic pursuits. The arduous work of athletics mimicked Ed’s own work ethic, and he admired those who were determined to work hard in the pursuit of excellence.

Ed was a good husband, father, grandfather, brother, uncle, and friend, but above all, he was a good man. We will miss his fishing stories, his baked goods, his sense of humor, his independent spirit, and his retelling of Bills family adventures. Yet, we are comforted that his body has finally found peace from the pain of the last few years. A heartfelt thank you goes to Dr. John Luras and Amy for their many years of care for both Ed and Carma.

There will be a celebration of both Carma and Ed’s life held at the Stonebridge Golf Course Clubhouse in West Valley City on January 30, 2016 at 12:00 noon. The family requests no flowers. Carma and Ed both acknowledged the importance of education, as such, donations can be sent to a fund set up in their names at Cyprus Credit Union. The money will be used to establish scholarships at Cyprus High School, Kearns High School, and a donation to the Diabetes Foundation. Online condolences: www.peelfuneralhome.com

To order memorial trees or send flowers to the family in memory of Ed Bills, please visit our flower store.