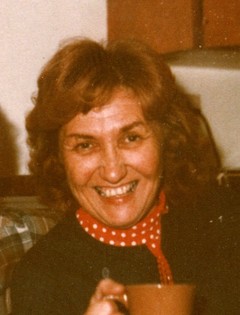 A wonderful wife, mother, grandmother, great grandmother, sister and aunt, Elaine Riley Dern passed away on January 9, 2015 at the age of 87.  She went peacefully surrounded by her loving and caring family.  Her strong Irish and Italian heritage sustained her for all these many and sometimes difficult years.   Elaine was born in Magna, Utah on May 23, 1927, to Mary Nicolo and Martin “Mick” Riley. Later her beloved stepfather, Julio “Dutch” Del Porto raised her. She called him “Daddy Del”. She graduated from Cyprus High School in 1944 where she was active in many school activities including the Drum and Bugle Corp. She attended the University of Utah for two years. She married Floyd “Buzz” Dern Jr. September 23, 1950 in Magna, Utah. Buzz passed away January 13, 1981. Elaine was the consummate homemaker and stay at home Mom. Elaine was a strong supporter of her children and grandchildren’s activities and was never bashful about telling anyone who would listen about their accomplishments. She raised her family and lived in the same home for sixty-three years, one of the many built by her grandparents, Louie and Angiolina Nicolo. She then continued her life at Legacy Assisted Living center until her passing.  Elaine was a beautiful and caring person. She exuded a great love for all animals. She was active in Our Lady of Lourdes Catholic Church in Magna, involved in the Ladies Altar Society and the bowling league. She loved to dance and go to concerts.  She crocheted many afghans that have been passed to her grandchildren.  Her sons and their spouses, Deveraux R. Dern (Melanie), Kevyn L. Dern (Sara) and Kary I. Dern (Tammy) survive her. Also survived by her grandchildren, Dustin (Ashley) Dern, Joshua (Krystal) Dern, Ashley(Dak) Harvey, Emily Dern, Elena and Maura Dern;  two great grandsons, Zachary and Clayton Dern; three great granddaughters, Hailey Coulon, Gabrielle Dern and Nolynn Quinn Harvey (due April 2015). Survived as well by her loving and caring sister, Verlene Del Porto; sister-in-law, Valerie Del Porto and including many nephews, nieces and cousins. Her husband, Buzz whom she sorely missed for the last thirty-four years, her parents, and her brother, Delbert Del Porto, preceded her in death. The family would like to thank the Cornerstone Hospice and Legacy House family for all of the loving care they provided to Elaine at the end of her life.  In lieu of flowers, the family asks donations be made to the building fund at Our Lady of Lourdes Catholic Church in Magna and the Humane Society of Utah.

A Mass of Christian burial to be celebrated Friday, January 16, 2015 at 11:00 am at Our Lady of Lourdes Catholic Church, 2840 S. 9000 W., in Magna. Committal will be at Wasatch Lawn Memorial Park. Online condolences: www.peelfuneralhome.com

To order memorial trees or send flowers to the family in memory of Elaine Dern, please visit our flower store.