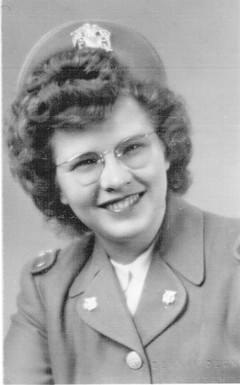 Eloise Matkin Wyrouck (90) has returned home to be greeted by her beautiful baby boy to be held in his arms and her daughter Joanne. Born January 12, 1925 in Franklin, Idaho at her Aunt Clara’s home.  She was the 9 th of 13 children of George Quayle Matkin and Julia Constance Allen.  She grew up in Swan Lake, Idaho on the family ranch.  She learned to work at a young age to help out. She graduated from Downey High School in 1943 and then went to Utah State in Logan, UT to become a Registered Nurse.  She served in the Army Nurse Corp and went to Denver Colorado and specialized in pediatric care.

Eloise met her sweetheart, Samuel Wyrouck at the Roller Skating Rink in Logan, Utah while he was training for the Army Air Force.  They courted and wrote letters during the war.  After the war, Sam came back and they were married at the home of her parents in Swan Lake on August 11, 1946.  They were later sealed in the Logan Temple.

Shortly after they were married they moved to Butte, Montana and she worked in the St. James Hospital.  They moved to Idaho Falls in 1959 and then moved to Pocatello in 1962.  She served in her wards faithfully and was a great example of Christ like love serving others. After her children were raised and they retired, they moved to Island Park and managed campgrounds for the forest service.

They were blessed with five daughters and one son, Cheryl (Edwin) Olsen, Joanne (Tom) Risdal, Susanne (Tim) Gillett, Alice (Gary) Baumgartner, Rosalie (Mike) Briggs, and Samuel Matkin Wyrouck. Eloise was a loving grandmother to 28 grandchildren.  She loved to sew, play and cook with them.  She was a wonderful grandmother and loved by all her grandchildren. And a bonus she had 51 great grandchildren and 2 great-great grandchildren. Eloise was preceded in death by her parents; all of her siblings; daughter, Joanne; precious baby son, Samuel; and two granddaughters, Julia Ann and Jill.

Funeral services will be held 12 noon Friday, January15, 2016 at the Swan Lake Chapel, where a viewing will be held 11-11:45 prior to services. Interment: Swan Lake cemetery. In lieu of flowers please make donations to the Cystic Fibrosis Foundation. Online condolences: www.peelfuneralhome.com

To order memorial trees or send flowers to the family in memory of Eloise Wyrouck, please visit our flower store.