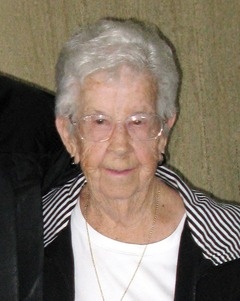 MAGNA- Faun Cossey O’Keefe passed away December 6, 2014 in Magna, Utah. She was born on October 17, 1924 in Salt Lake City, Utah to Hyrum and Zella Cossey. She graduated from Park City High School in 1942. She moved to Salt Lake City and worked there for several years during the war. She married her child sweetheart, William M. O’Keefe on March 18, 1946 in Park City. In December of 1952, she moved to Magna where she lived the rest of her life. She was involved in numerous volunteer organizations such as the PTA, 4H, Red Cross, Drummer Boy program, Catholic Community Services and the funeral committee. Faun’s husband and three daughters were the center of her life. Her home was the gathering place for many young people during her daughters’ and grandchildren’s teenage years. She enjoyed sewing, crocheting, crafts, cake decorating and camping with the grandkids. After Bill’s retirement, they took many trips for the “Navy Buddy” reunions where she made lifelong friends. In her later years, she took two trips to Ireland. She was an active member of Our Lady of Lourdes parish for many years. She is survived by daughters, Peggy (Flamminio) Di Sera, Kathy (Mark) Powell, and Cindy O’Keefe; grandchildren, Danielle (Harry), Jennifer, Billy (Becca), Angela (Jamie), Caren (Ben), Jon (Tiff), and Matt (Gina); and twelve great grandchildren. She is preceded in death by her parents and husband, William. The family would like to thank the IHC Hospice team; Kim and Leslie, for all their kindness and compassion. Friends and family may call Thursday, December 11, 2014 at Peel Funeral Home, 8525 W 2700 S in Magna at 6:00 to 7:30 p.m. after which a prayer service will be held at 7:30 p.m. Funeral Mass will be held on Friday, December 12, 2014 at St. Mary of the Assumption Catholic Church, 121 Park Avenue, Park City at 11:00 a.m. Friends may call from 10:00 to 10:45 a.m. In lieu of flowers, please donate to the charity of your choice in her name. Committal: Park City Cemetery.

To order memorial trees or send flowers to the family in memory of Faun O'Keefe, please visit our flower store.