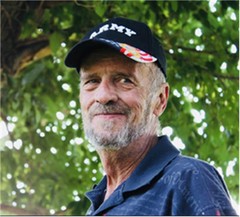 Gary Curtis McGowan (Twig) passed away April 11, 2018. Gary was born on October 29, 1950 in Vallejo, Ca to Ralph & Dorothy McGowan. He was raised in Magna, UT and graduated from Cyprus High in 1968. Gary served in the Army during the Vietnam war, and was awarded a Purple Heart. Gary loved his country so much that he decided to serve again in the the Gulf War as a civilian mechanic. He retired from the Tooele Army depot, where he worked as a mechanic and in security. After retirement he went right back to work at the Salt Lake City Airport where he eventually retired in 2013. He loved animals, especially his cat Patches and bird Bo Bo. You could always catch Gary reading, camping, shooting guns and/or riding 4-wheelers.  Spending time with his family was what he enjoyed most. You could count on him to be at any family event. Gary was one of the most selfless people on earth and would give relentlessly, and without expectation. He is preceded in death by both his parents and sister Debra Simmons. He is survived by his Brother Michael McGowan, nephews Jeramy Heinberger (Brandy), Ben McGowan (RoChelle), Preston Heinberger (Mallory), Matt McGowan (Randi), Beu Heinberger, Chris Simmons and nieces Holly Porter, Brandi Porter, Shannon McFadden (Josh), Kristen Urie (Dallas) as well as several great nieces and nephews. Uncle Twig, thank you for always loving us and showing us what unconditional, selfless love looks like. You will be forever missed and never forgotten. Services will be held Friday April 20 at Peel Funeral Home in Magna. Viewing from  11am-12pm, services start at 12pm followed by the Burial at Camp Williams. For more info please go to www.peelfuneralhome.com . In lieu of flowers please send donations to Peel Funeral Home to help with the services.

To order memorial trees or send flowers to the family in memory of Gary McGowan, please visit our flower store.