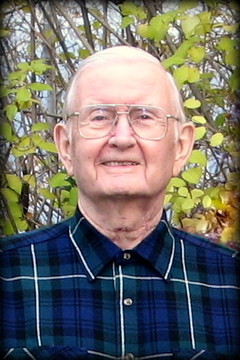 George Montford McFall, born September 22, 1925, departed this world on September 5, 2014.  We have lost a good father, grandfather, and friend.

George’s first girlfriend was the USS Saratoga. He was on board when she was standing off Iwo Jima in February of 1945. That was when she was hit by bombs and kamikaze.  George’s naval career took him all over the world.  He retired after more than 22 years, having served in WWII and Vietnam.

George then pursued a career as head of security in a shopping mall in Illinois until poor health forced his next retirement.  He began volunteering his time at a local hospital before moving to Magna, Utah to be closer to family.  George provided well over 10,000 hours of service between Illinois and Pioneer Valley Hospital in WVC, Utah.

George married Johnnie Nell Alexander in 1948, and later divorced.  He married Catharine Riggs Miller in 1971, combining the McFall and Miller clans. He is survived by his daughter Dale Storey (Bill); sons James McFall (Beth), Mike McFall (Marilyn), James Miller (Joan), Riggs Miller (Jean); and many grandchildren and great-grandchildren.  He was preceded in death by his wife Catharine, son George Miller, and daughter-in-law Cynthia.

A private family memorial will be held Wednesday, September 10. George will have a military burial at sea.  Arrangements have been made through Peel Funeral Home in Magna.

Many thanks to Martina, Tami, Wayne, the staff of Legacy House of Taylorsville, and his other hospice caregivers.  Thanks also to his friends and well-wishers over the last four years.  In lieu of flowers, please “pay forward” an act of kindness on George’s behalf.

To order memorial trees or send flowers to the family in memory of George McFall, please visit our flower store.