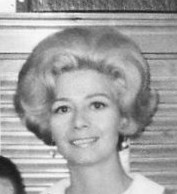 A woman who influenced so many passed on November 4, 2017.  Our mother did not influence in ways many typically do, but she was a “force” unto herself.  She influenced through her strength of will and character.  Never did she complain or make excuses for the struggles of her life—no she lived each day to the best of her abilities.  Those who have had the privilege of knowing her have many memories and fun stories which will stay in our hearts for many years to come.  Georgene married Val R. McQuivey in 1957 and they had two children who love and cherish them dearly, Tony (Mandy) McQuivey and Melinda (Stephanie) McQuivey.  They were blessed with two wonderful granddaughters, Alexandra Nixon and Madison McQuivey who have brought much sunshine and love to their lives.  We all mourn  her dearly but know she has found the peace that she has so deserved.  A special thanks needs to be expressed to her daughter-in-laws, Mandy and Stephanie who have never waivered in their love and caring without them these past few years would not be filled with such found memories.  Georgene, is survived by her husband; children; and granddaughters; as well as her siblings, George (Barbara) Mageras; Barbara Paulos; John (Sharlene) Mageras; and Elaine Smith.  A special thank you to two wonderful hospice staff members, Reggie and Kylee who made the last month one filled with kindness and true caring.

In lieu of flowers please make donations to MS or cancer research.

To order memorial trees or send flowers to the family in memory of Georgene McQuivey, please visit our flower store.