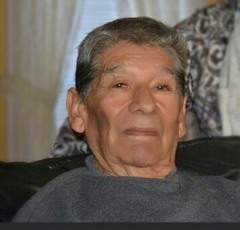 Our beloved Brother, Father, Papa, Great Grandpa, Uncle and friend passed away on March 7, 2017. He was born on April 26, 1935 to the late Clemente & Sophia Trujillo in Salida, Colorado. He is survived by his Daughters: Gail Trujillo and Misty (Robert) Greninger.

Godson: Kaiden Mansfield and Goddaughter: Kaley Mansfield along with numerous nephews and nieces.

He was proceeded in death by his loving wife Tracy Trujillo, sons Gilbert Trujillo and Alfonso Marquez, and his brother Domingo Trujillo.

Gilbert served in the United States Army. He enjoyed trips to Wendover with his wife, and fishing trips with his friend Terry in Tooele. Gil was the best story teller and could always make everyone laugh. He enjoyed his special time with his grandchildren and gossiping with his daughter Misty.

Gil lived a long and happy life and lived it to the fullest.

The family would like to give a special thanks to his Hospice team at Valeo, Reggie, his nurse and PJ, his case worker. They took amazing care of my father, and showed unconditional love and care until the very end.

In lieu of flowers please send donations to the American Cancer Society.

To order memorial trees or send flowers to the family in memory of Gilbert Trujillo, please visit our flower store.