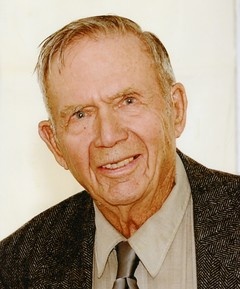 Harold Boyd Thomas died peacefully in his home on July 20, 2017 surrounded by his family.

Harold was a wonderful husband, father, grandfather, great grandfather, and great great grandfather. He liked to say that he was a “Jack of all trades” but truly he was a “Master of all”. He always greeted his boys with “Hey Sunshine”. He was an active member of the Church of Jesus Christ of Latter-day Saints and served faithfully in many callings and assignments. His hobbies included: being a member of the Nebo and Magna Riding clubs, working in his workshop, dancing, gardening, hunting, snowmobiling, taking care of his sheep and projects with his family. Above all he loved his family and believed that family always came first.

Harold was born April 27, 1923 in Wales, Utah. Born the fourth of five children to Ephraim T. Thomas and Anna Margratha Anderson. He grew up on a farm learning the value of hard work and sacrifice. As a young adult Harold herded sheep to earn enough money to buy his sweetheart, Marie Kendall, an engagement ring. They were married May 23, 1942 in Nephi, Utah and sealed for time and all eternity in the Manti temple on May 28, 1942. Harold moved his family to Magna, Utah in 1954 where he was employed by the Granite School District as head custodian at Cyprus High School and subsequently at the District Maintenance Shop, where he finished his career. Harold and Marie were blessed with seven children, three girls and four boys.  Marie passed away on October 8, 1991. On November 7, 1992 Harold married Hilda Anderson and became a stepfather to three children: one boy and two girls. Hilda passed away December 19, 2013.

The family would like to express our sincere gratitude to Dad’s caregivers over the past year, to include: In Home care, Sagewood Senior Living Center, Beehive Homes and Brighton Hospice.  The caring and kindness shown to our father and to us will never be forgotten.

To order memorial trees or send flowers to the family in memory of Harold Thomas, please visit our flower store.