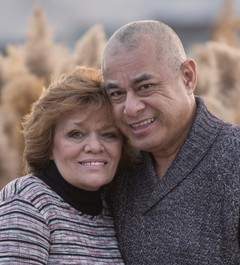 How do you eat an elephant?

The answer is one bite at a time.

Losing this incredible man is like eating an elephant for us. We have to take it one minute at a time, and sometimes even one second at a time.

PJ used analogies almost as often as he drank Pepsi. If he offered you one or the other, you knew that you were important to him.

He had a unique way of making anyone who came in contact with him feel better about themselves. He uplifted everyone around him, especially his family.

His brothers, sisters, and parents meant so much to him. They were always a huge priority in his life.

His world forever changed in 1982 when he married the love of his life, Melodie Brandt.

They were 1 month shy of celebrating their 36th anniversary.

In their wonderful years together they had 5 sons, and 1 daughter. He gained a son-in-law, as well as 3 daughters-in-law in more recent years.

His kids gave him the greatest gift and his favorite people, his 14 grandchildren. They filled his days with joy and love.

As PJ got older, his heart changed. He became less of a warrior, and more of a teddy bear.

He was the greatest grandpa. He was an incredible father, and a remarkable husband.

He was more than that too.

He was a son, a brother, and uncle.

He was a best friend.

He was a diligent, hard worker.

He was a DJ, a project manager, and teacher.

He was a mentor and a counselor.

He was our guidance, and our strength.

He was our support.

He was our leader.

Simply put, he was ours.

PJ taught us many lessons, but the one thing he stressed more than anything else was that the only thing that matters in the world, is love.

To order memorial trees or send flowers to the family in memory of Harry Peterson Jr., please visit our flower store.