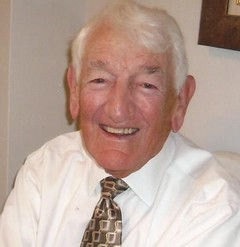 On May 22, 2015, in MAGNA, Utah, John Edward Gardner, better known as Jack Gardner, passed away peacefully at his home doing what he loved most to be outdoors.   He was the son of Edward John Gardner, Jr. and Elizabeth Pearl Skillhorn, born December 16, 1920 in Salt Lake City, Utah.  He was a devout member of the Church of Jesus Christ of Latter Day Saints.   He married his high school sweetheart, Marian Petersen, on July 29, 1942 in the Logan Temple.  He majored in communications at the University of Utah and served an LDS mission in Pensacola, Florida.  Dad’s mission was unfortunately interrupted due to World War II and therefore served in the Army Air Corps as a B24 and B17 pilot.  Captain John E. Gardner flew 50 missions without a casualty.   For approximately 26 years, he was owner of Gardner’s the Men’s Store.  He served as president of the Magna Chamber of Commerce.  He was a member of the Lion’s Club.  Due to his training in communications, he was the announcer for the 4 th of July celebrations at the Magna Park for approximately 14 years.  He was also the announcer for the Haynes Lake boat races.  He was a member of the Copper Golf Club since 1930.   He had many hobbies to name a few:  reading, flying, golfing, photography, shooting, watchmaking

His family and his testimony of the Gospel of Jesus Christ were his most prized possessions.

To order memorial trees or send flowers to the family in memory of Jack Gardner, please visit our flower store.