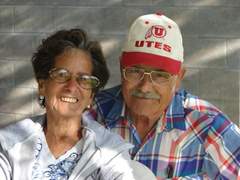 Our loving husband, father, grandfather, great-grandfather, brother, uncle and friend, Jimmy Herrera was reunited with the love of his life, Martha, on February 22, 2016. He was born January 21, 1937 in Chamisal, NM to Antonio and Francis Herrera. He met his wife in 1964 and they were married in Elko, NV on June 1, 1965. Their marriage was later blessed in the Catholic Church. He was a member of Our Lady of Lourdes in Magna where he was active in the Knights of Columbus. He worked for Tooele Army Depot where he retired after 36 years.

Dad had many interests including watching the Utah Utes, Notre Dame and especially his Colts. He was an avid fisherman and loved the outdoors, playing solitaire, Ford trucks, and a cold Bud Light.

The family would like to express their gratitude to Dr. Schorlemmer and staff at Timpanogos Regional Hospital and Dr. Al and staff at Utah Valley Specialty Hospital for the loving care they provided our father.

In lieu of flowers please make donations to the woundedwarriorproject.org

To order memorial trees or send flowers to the family in memory of James Herrera, please visit our flower store.