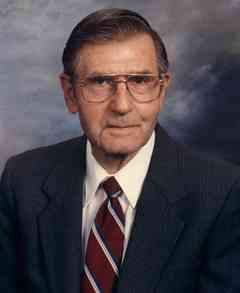 Jeddie Woodrow Hart, our beloved father, grandfather, brother, uncle, and friend, passed away peacefully in his home September 2, 2016, just shy of his 97 th birthday.  Jed was born October 20, 1919 in Preston, Idaho to Arthur W. Hart and Ada Doney Lowe.  One of 21 children, Jed enjoyed a close relationship with his siblings throughout his life. He was a faithful family man attending every wedding and funeral possible.  All who came to visit were shown his prize photo of his siblings and their parents.  Excelling as boy scouts, Jed and his brother Wendell received their Eagle Scout Awards at ages 13 and 14, becoming two of the youngest Eagle Scouts in America at the time.

The bombing of Pearl Harbor shortly before his scheduled departure reassigned Jed’s mission from the Japanese mission in Hawaii to California. Jed served an LDS mission in Southern California from January 1942 to February 1944. As an active member of the LDS Hunter West Stake, he served as a ward financial clerk and stake financial clerk for a total of 27 years. We lovingly remember him with his adding machine going over the numbers until they were perfect.  Faithfully attending the Temple and his Church meetings even as his health failed him, Jed was an inspiration to many who saw him as an unassuming giant among men.

Jed met his dear wife Camille Bright on a blind date.  They married in the Logan LDS temple November 3, 1947 and had three children, Ellin, Phillip, and Jane.  Ellin, their first daughter passed away at 9 months old.  Jed lovingly cared for his wife all through her life even coming out of retirement to help pay for her diabetic medications. He was always gentle and rarely complained, sometimes calling himself the “silent partner” in their marriage. Jed and Camille enjoyed music and square dancing together. They were very proud of their heritage, participating with the Sons and Daughters of the Utah Pioneers for many years. We rejoice in the joyful heavenly family reunion which has surely happened.

Some of Jed’s favorites included eggs and cornflakes with cocoa for breakfast (as a child this prompted his siblings to nickname him “eggs and cocoa”), strawberry ice cream, bowling, watching Lawrence Welk, I Love Lucy, BYU football, Utah Jazz and nature documentaries.  He could sometimes be caught watching cartoons with the great-grandkids. He loved their company. At the moment he passed, his great-grandson was watching cartoons with him in his bedroom.

Jed worked for Kennecott for 31 years in precious metals and as a tank house operator. He loved hiking and especially enjoyed visiting Yellowstone National Park with his children and grandchildren. Jed loved working in his yard and insistently continued mowing his lawn until well into his 90s. His yearly bounteous garden grown at his West Valley City home blessed many as he shared the surplus with neighbors and friends.  Grandpa’s beautiful backyard was a magical place for the grandkids with trees to climb, fruit and tomatoes to eat, and weekly muddy swimming holes.  Jed and Camille extended their love to everyone they knew, many adopting them as surrogate grandparents.

To order memorial trees or send flowers to the family in memory of Jeddie Hart, please visit our flower store.