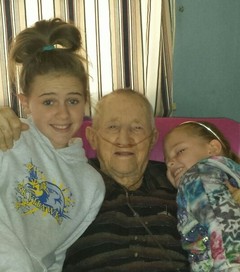 Our beloved father, grandfather, and brother, John Almon Drain passed away peacefully November 19, 2015 in his cabin on Boulder Mountain.  He was born March 21, 1928 in DeKalb County, Alabama to Sherman E. and Rubie Ali Williams Drain. John served in the US Army during WWII, stationed in Italy. After moving to Utah he went to work for and retired from Kennecott Copper, and was involved in several business ventures with Randy and Brenda. John was a proud member and sponsor of AA, where he helped many people. He was well loved and will be dearly missed by all of his family. John is survived by his daughter, Brenda (Randy) Catmull; grandchildren, John (Roberta), Jim (Vicky), and Lucus (Brandi) Catmull, RaeLynn Powers, Mike (Dawn) Hill, and Mikki Chambers; 17 great grandchildren; 2 brothers and 1 sister, Lynn Drain, Madge Wolf, and Bill (Judy) Drain. He was preceded in death by his parents; 4 brothers and 2 sisters; and daughters, Sharon and Rhonda.

The family would like to express their thanks to his nurse, Denise Singer of Superior Hospice for all the care they gave John.

To order memorial trees or send flowers to the family in memory of John Drain, please visit our flower store.