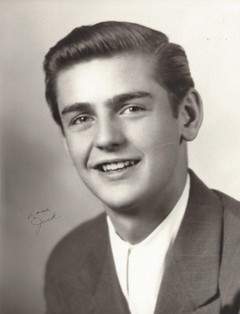 Our wonderful and much-beloved husband, father, grandfather, and great-grandfather, “Grandpa Jack”, John Byron Johnson returned to his eternal home and into the arms of his Savior and loved ones on November 10, 2014. He was born August 25, 1929, in Murray, Utah, to Gustave Lorenzo Johnson and Virginia Forbes Johnson. He was the oldest of five children. He loved to swim, and much of his boyhood was spent at the Murray pool. His family moved from Murray to Garfield, Utah, when he was a teenager. He attended Cyprus High School, where he lettered in track and field. During the spring of his sophomore year, he met his sweetheart and love of his life, Dorothy Gayle Bello. They were married April 11, 1947, and were sealed in the Salt Lake Temple later that year on the day before Thanksgiving. They joyfully welcomed five children into their home. Jack was a devoted, loving husband and dedicated father who set an example of hard work and gospel living. He absolutely adored his children, each of whom was certain they were his personal favorite. Jack and Dorothy's courtship and deep love for each other have continued through 67 years of marriage. Jack was a master carpenter and well-known general contractor, whose high-quality work can be found in numerous beautiful homes, condominiums, and apartment complexes along the Wasatch Front. His craftsmanship can be exemplified by one of his favorite sayings: “Perfect is close enough.” As a true disciple of Jesus Christ, he served faithfully in many callings in The Church of Jesus Christ of Latter-day Saints, including Young Men leader, counselor in two bishoprics, bishop, high councilor, and temple worker. He is survived by his eternal companion, Dorothy; children, Gayle Featherstone (Zen), Scott (Lisa), Susan Nielsen (Lee), Nancy Harmon (David), and Jeff; 18 grandchildren; 28 great-grandchildren; sister, Jilene Petersen (Gary); and brother Rustin (Cheri). He is preceded in death by his parents, and brothers, Ronald and Gerhad.

To order memorial trees or send flowers to the family in memory of John "Jack" Johnson, please visit our flower store.