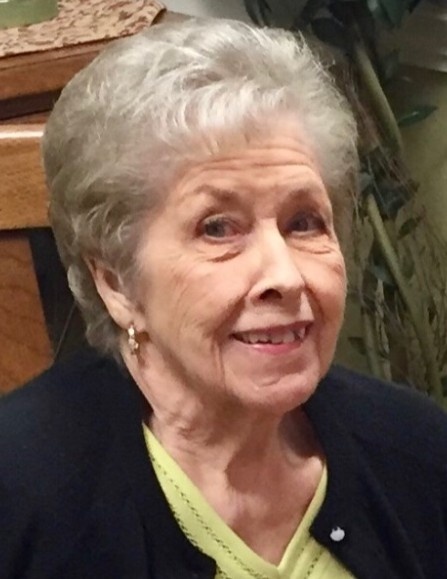 With her loving daughter by her side, Joyce Pullum Thomas died peacefully on April 24, 2022 in Taylorsville, Utah where she had been residing in memory care.  She was 92 years old.

Born August 30, 1929 in Magna, Utah to Charles and Gertrude Carsey Hutchings, she was the seventh of their eight children.  Her childhood and teenage years spanned both the Great Depression and World War II, major historical events which impacted the lives of everyone.  She and her family endured the harsh reality and met the challenges they faced with faith, hope, and unending resilience.  She learned early on about sacrifice, the value of hard work, the importance of family and community, and to have compassion for all.  She remembers being sent out into the neighborhood as a 5 year old with her little red wagon full of corn they grew on their small farm.  She could command up to 15 cents for a dozen ears and always proudly returned with an empty wagon.  In high school, she was privileged to be chosen as one of the two Drum Majorettes, along with Glenna Furrow,  to flank Drum Major Merrill Duckworth to lead the widely acclaimed Magna/Garfield  Drum and Bugle Corp.  As she participated with the well known band, she was thrilled to travel, perform and compete. They were dubbed by the newspaper as "The Best West of the Mississippi" and were the reigning state champions from 1938 - 1946.  This experience was one of her favorite memories and highlights of her young life.

She met her future husband, Hal Pullum, when she was 15 and he was home on leave from the Navy.  They became engaged a year later and were married in 1947, having 3 children together.  In 1967 they relocated to California with their two youngest children when Hal accepted a job with UC Davis.  They divorced in 1969.  She married Charlie Thomas in 1973.  Later divorced.

Joyce had a long career as a medical transcriptionist and worked for many area doctors in Davis and Woodland, (California) before settling in at the Woodland Clinic in 1973 where she continued to work for the next 22 years.  As a single, working mother, she was keenly aware of the established workplace inequities between men and women.  Her employer had historically underpaid it's female employees, had no system in place for salary progression or grievances, and benefits were meager at best.  Fed up with the injustice, she rallied her co-workers in defiance of workplace conditions and helped organize a strike and picket line with union involvement and support.  After a contentious 6-week battle, the employees successfully negotiated a union contract, wage increases, benefits, and improved working conditions.  Joyce went on to serve as President of the Woodland Clinic Unit of Engineers and Scientists of California (AFL-CIO) from 1979 - 1981 and represented more than 200 nurses, LVN's, transcriptionists, clerks and receptionists.  She remained active in the Union until her retirement in 1995.

She moved to the Rancho Yolo Senior home park in 2003 and very much enjoyed the friends she made there.  She was active in planning and organizing many potlucks and activities for park residents and tended to a rose garden that could rival the best.  After the diagnosis of her illness,  she was well and lovingly cared for by her son Barry for several years.  In 2015 she returned to Utah for memory care and to be near her daughter.  The family is so grateful to Legacy House of Taylorsville for providing her with such a loving and nurturing environment during her final years.  We also express our gratitude to Inspiration Hospice for their invaluable support.

Joyce was a fiercely independent woman who will be remembered for her beauty, courage, generosity, tenacity and love.  She will be greatly missed by all that knew her.

To order memorial trees or send flowers to the family in memory of Joyce Thomas, please visit our flower store.