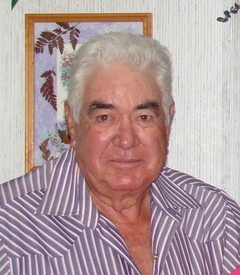 Magna/Grantsville, UT – Julian F Manzanares, age 77, passed away peacefully at home with his family by his side after a long battle with Progressive Supranuclear Palsey, a rare brain disorder.  Julian was born October 17, 1937 to Solomon and Lupita Manzanares in Blanco, New Mexico.  He married the love of his life, Karen Bolinder in 1957 in Tooele, UT.  He is survived by his wife; 5 children, Julie (Bill) Schwartz, Brenda (Dennis) Barbour, Becky (Gary) McDonald, Kathy Scott, and Mark; 8 grandchildren and 13 great grandchildren; brothers, Felix (Melba), Ramon, Joe (Liz), and Ronald (Rita); and 2 sisters, Rosa Moore and Chella (Larry) Hogge.  He is preceded in death by his parents; and sister, Aggie.  Our father was a very hard worker, spending 28 years at Kennecott (Rio-Tinto) and also working a second job.  After retirement he worked as a campground host, and also a school crossing guard for the Grantsville City Schools.  He didn’t know the word retirement.  His greatest love was spending time with family, in his garden and being involved with his grandchildren.  He loved Westerns, not a movie he couldn’t quote.  He had a quick wit and was beloved by all who knew him.  He deeply cared about the children in his care as a school crossing guard, purchasing coats and gloves for those in need.

We want to extend our heartfelt thanks to the Harmony Hospice staff who lovingly cared for our father.

In lieu of flowers the family requests donations to Primary Children’s Hospital.

To order memorial trees or send flowers to the family in memory of Julian Manzanares, please visit our flower store.