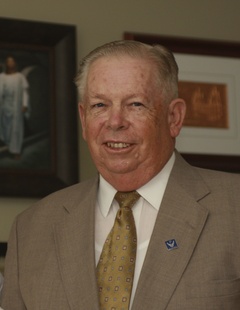 Kenneth “Kenny” Ray Brock 76 of Magna Ut. Passed away on Monday, November 7th, of complications of a stroke. He was surrounded by family when he passed on at IHC medical center. Ken was survived by his wife, LaRay of 52 years. Ken was born on April, 3rd, 1940 in Thompson Utah, his parents are James G. Brock and Louise Pearl Huckabay Brock. A little after the family moved to Green River, Ut. Ken was 10 years old when he was baptized a member of the Church of Jesus Christ of Latter day saints; at the time he lived in Durango Co. In high school he was in the marching band and played a saxophone. In 1956 the family moved to Salt Lake City. He went to Granite High School and he played football his coach was LaVell Edwards, he also was in the Band. He graduated in June of 1958. He worked for Miller Honey Co. He also worked at Maxfield’s Candy Co Until March 1959. He joined the USAF on April 6, 1959. He was a assistant Flight Engineer. He got to see the world and he had fond memories of his adventures in the AF. He got out of the AF on April 5, 1963. He worked at Sweet’s candy company, and then in September of 1963 he worked at Maxfield’s candy co, he met his love of his life there. It was a

indeed a “sweet” story. On May 15th, 1964 they were married for time and all eternity in the Salt Lake temple. Ken and LaRay worked at Maxfield’s, then in 1969 he worked at Hill Air Force base until 1976. At this point Ken and LaRay had four kids David Jay, Kenneth Wayne, Kristine LaRaine and Katie LaRay. In 1976 the family moved to Magna Ut, while Ken returned to work at Maxfield’s Candy Co. He was there until December of 1996, at this point the family lived in West Valley Ut. He worked at Autozone for a time, then he got an employment at the Utah and Salt Lake Canal Co. in 1998. He worked there until his retirement. However, Ken never really could fully retire he still wanted to work. Eventually they ended back in Magna Ut.

Ken loved his family. He was so pleased with all of their accomplishments. First and foremost he was a father. He was active in his children’s activities. He was his son’s baseball coach for years, and he loved watching his kids play ball. Also he loved watching his grandkids. He loved his westerns, and he loved music, he loved being a veteran serving his country, his patriotism was evident. He also loved his church callings.

We want to thank the doctors and nurses at IHC medical center. He didn’t want to spend time there however, he met some amazing people. Also, Peel funeral home for all their arrangements.

To order memorial trees or send flowers to the family in memory of Kenneth Brock, please visit our flower store.