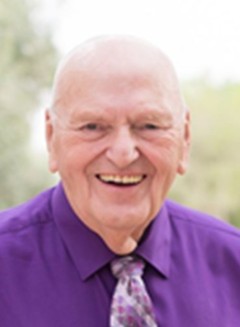 Larry Eugene Summers, Sr born on May 23 rd , 1939 in Lexington, KY at a robust 13 lbs.9 ounces (yes, almost 14 lbs) and passed away on February 4 th , 2017 in Phoenix, AZ. Larry was a beloved husband, father, brother, uncle and friend. He served his country giving 11 years of service in the U.S. Navy. After leaving the military he spent most of his working life at Chevrolet and Diamond Parking. He attained the position of Vice President at Diamond. He loved to teach and became an ordained minister for the Assembly of God church at the age of 71, after serving two missions to Thailand. He was proud to say he’d been to every state including Alaska and Hawaii and always met you with a smile and a handshake. He’d just rolled a 624 series and continued to golf several times a week. His bestie, Jack, was with him until the end. If he’d been any happier he’d have been in heaven – which is where he is now with Vivian, his wife of 50 year, who preceded him by two years. He will be missed by his wife Shirley, sister Linda, two daughters, Danelle and Lisa, son Larry Jr. and several grandchildren and great-grandchildren.

We would like to thank the Maricopa County Burn Unit team. They provided remarkable service to Dad and to us. They made a horrible situation bearable.

A celebration of his life will be held Saturday, March 4, 2017 at 11am at the Life Church located at 3818 West 4700 South. Bring your favorite Larry story to share during the luncheon provided after.

To order memorial trees or send flowers to the family in memory of Lawrence Summers, please visit our flower store.