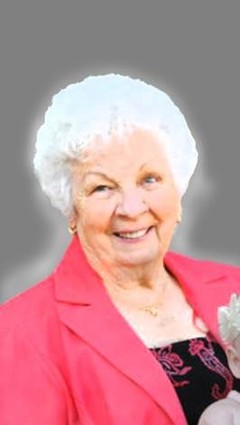 Madalyn passed away November 26, 2014 after a short illness while surrounded by her loved ones. She was born March 28, 1928 to Ernest and Nellie Mecham in Magna, Utah. Madalyn met her eternal partner, Donald George Robinson and they were married July 29, 1949. Later their marriage was solemnized in the Salt Lake Temple. Madalyn loved softball and played for many years with the Utah Shamrocks. She was inducted into the Utah Softball Hall of Fame in 1985.

She worked at Magna Water for 19 years before retiring with her husband in 1989. After traveling and seeing the country, her and Don served a mission in St. George, Ut.  Madalyn loved the gospel and served in many callings. She had a strong testimony of the gospel, being Christlike in many ways.  Madalyn was caring and giving to the end donating her eyes so someone else could see.

To order memorial trees or send flowers to the family in memory of Madalyn Robinson, please visit our flower store.