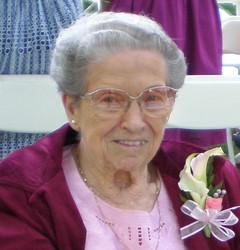 
On Thursday, February 26, 2015, we lost a great Mom, Grandma, Great-Grandma, Great-Great Grandma and friend to many after 91 plus years. Charlotte "Marie" Robinson Pearson was born May 22, 1923 in Coaldale, Alberta Canada to Lavina Hardman and Leigh Warden Robinson.  She was the middle child of six boys and two girls. Marie spent her youth in Magna, Utah on the farm and graduated from Cyprus High School.
On New Year's Eve 1946 at Coconut Grove in Salt Lake City, she met Lowell Henry Pearson and they married on June 12, 1947. Their marriage was later solemnized in the Salt Lake City Temple.
Lowell and Marie spent the majority of their lives in the Rose Park area in their home on Catherine Street, with many good friends and neighbors.
Marie was a person who loved life and loved people. She kept busy every day of her life - crocheting, cooking, sewing, etc. Everyone who knows her probably has something she made for them. Marie was the ultimate caregiver, she was always concerned about the well-being of her family and friends and was a constant support to many. We are sure that trait will continue on the other side of the veil.
Marie leaves behind her three children; Marion P. Herzog, Gregory Lowell Pearson (Suzi) and Marilyn Pearson. Four grandchildren; Lisa (John) Gotz, Chelsea Pearson, Haigen (Lisa) and Mac (Jocelyn) Pearson. Great-Grandchildren; Mercedes Marie, Katarina Marion, Woody, Savannah Grace and Henry Graham; Two Great-Great Grandchildren; Indie Rae and Moses Woodrow; along with several surrogate kids and grandkids, who have touched her life throughout the years.
Marie is survived by her sister, Elva Bowden; sister-in-law, Lorraine Robinson; brothers, Donald, Dean and Corky Robinson.  Preceded in death by her parents, her husband Lowell, three brothers Burt, Clarence and Earl Robinson, daughter-in-law Colleen Kay Pearson and Grand-Dog Zoee Marie.
Special thanks to the staff at Legacy House of Taylorsville, Westbrook 11th Branch and Aspire Hospice Care. Also a heartfelt thanks to Martina and Marnie for their loving care and concern for Marie and us as a family. She loved you all!
In lieu of flowers, donations may be made to the Utah Alzheimer's Association in memory of Lowell H. Pearson, or the Utah MS Society, in honor of Colleen and Chelsea Pearson.
Marie's Funeral will be held at the SL Rose Park North Stake Center on Thursday, March 5, 2015 in the 7th Ward North Chapel located at 1155 W. 1200 North (Boy Scout Drive) SLC, UT at 1:00 pm. Viewing will be held prior to the services from 10:30 am - 12:45 pm. Interment: Valley View Memorial Park at 3:45 p.m. Online condolences: www.peelfuneralhome.com

To order memorial trees or send flowers to the family in memory of Marie Pearson, please visit our flower store.