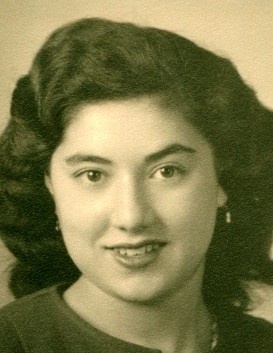 Mary Falcone Falvo, our loving mother, grandmother and great-grandmother, passed away peacefully on June 10, 2021 in Walnut Creek, California where she had been living for the past four years to be near her daughters. Mary was born March 23, 1931 in Celico, Italy to Carmine and Faustina Falcone. She immigrated with her mother to the United States at four years of age, joining her father who had settled earlier in Salt Lake City. She quickly learned English at a young age in order to teach and translate for her parents. Her strong bilingual abilities helped her family assimilate to life in America. Her tender stubbornness and sense of humor was a favorite personality trait for anyone who knew her.

Mary was introduced by family friends to Frank Falvo, the love of her life. They were married in 1950 and were happily married for 62 years until Frank's passing in 2012. She is preceded in death by her husband, daughter Francis Falvo, sister Eda Dixon, sister-in-law Karen Falcone, son-in-law Chris Peckham and niece Stacey Fox.

Growing up in Salt Lake City as a young woman, she was a source of support for her family, often caring for her younger siblings. Mary’s main priority was always her family and friends. In both good and difficult times, she could always be counted on to be there for those she loved. She graduated from South High where she enjoyed singing in the choir. She was a member of the church choir and the Sweet Adelines, where she performed throughout the state of Utah and competed in a national competition in Washington, D.C. She could often be heard singing around the house making up silly songs or humming a tune, and her beautiful voice will be missed.

Mary worked with Frank in their sporting goods store in Magna where they remained active members of the community for most of their lives. During their life together, they loved golfing and traveling to many wonderful places. However, she was the happiest surrounded by her family and closest friends. Like her mother, Mary was an amazing cook, and took great pleasure in cooking for her family. If you were invited for a Sunday or holiday dinner, you were never disappointed (and knew to wear pants with an elastic waistband). Later in life she taught herself oil painting and spent many hours painting beautiful outdoor scenes, often creating unique art pieces and gifting them to loved ones. She was a long-standing member of the 445 Shadow Thursday bowling league and looked forward every week to spending time with her friends at Delton Lanes. Her sense of humor was one of a kind and her laugh was contagious--she could brighten up any room. She lived a wonderful life and will be sorely missed by everyone that knew and loved her.

A Celebration of Life will be held from 4 p.m. to 8 p.m. on Wednesday, June 23, at Old Farm Lexington Village Social Center, 620 East 4135 South, Murray, Utah where dinner will be served.

In lieu of flowers, the family has requested donations in Mary’s name to: The Alzheimer’s Association

To order memorial trees or send flowers to the family in memory of Mary Falvo, please visit our flower store.