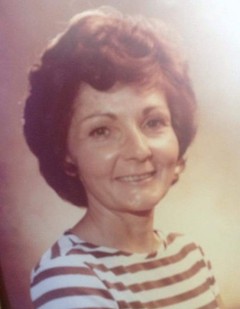 With sad and joyous hearts our mom, grandmother, sister, aunt, and friend, Maxine Dora Andelin has lost her battle with COPD. She was born January 12 th 1937 in Garfield, UT to Max B. and Neva Lucille Wimmer. She passed away July 17 th 2016 after her courageous battle. She married Robert John “Bob” Bevan September 24 th 1954, later divorced. They had four children, Shelley, Cindy, Rick, and Johnny. She then married Dennis Pat Andelin, later divorced.

She worked at Mori’s in Magna, then Grand Central in Salt Lake and finally at Tooele Army Depot, where she became the first woman fork lift operator until her retirement.

Mom loved to golf, play cards with family and friends and bake, especially when her grandchildren were around.

We want to give special thanks to Chuck (her other son) Johnson for keeping her sweet tooth satisfied. To Danny Rodriguez and Carolyn Bevan for their love, understanding, support and patience over the last year. Thanks to Hunter Hollow and Inspiration Hospice for being there with love and compassion - Dr. Steve, Debra (her Hospice Nurse) and Dotty her Social Worker.

Waiting for her are her parents Max and Neva; great grandson, Nicc; and many other loved family and friends.

To order memorial trees or send flowers to the family in memory of Maxine Andelin, please visit our flower store.