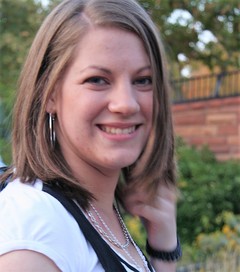 Our Beloved Daughter, Sister, and Aunt passed away on May 30, 2017 after a week long battle to recover from an unexpected blood clot in her lungs and extended cardiac arrest. She was surrounded by her loving family on both sides of the veil at the time of her passing.

Megan was born on November 11, 1987 in Salt Lake City as the fifth of seven children to Michael Walter Coon and Cynthia (Zobell) Coon. She graduated from Murray High School in 2006 and began her 11 year career at State Trailer Supply the same year. She received a degree in Graphic Design from Salt Lake Community College in 2015, and had began working professionally as a graphic artist the same year.

Megan was a talented artist and could often be found drawing in a sketchbook that she always had with her. She enjoyed reading novels, crocheting beanies for nephews and nieces, and anything related to Teenage Mutant Ninja Turtles, but hated spiders. She was an active member of The Church of Jesus Christ of Latter-day Saints and served faithfully in many church callings, which include teaching Primary children and serving on the Activities Committee. She was very close with her parents and all of her siblings. She was a wonderful Aunt and loved playing with and spoiling all of her nephews and nieces.

She is survived by her parents, Michael and Cyndy Coon; siblings, Adam Coon and Adam Applegate, Matthew and Launa Coon, Heather and Clay Chorn, Joshua and Jennifer Coon, Zachary Coon, and Brady Coon.

She is also survived by her loving nephews and nieces, Robert, Aili, Kelly, and Rebecca Chorn, Evelyn, Jolene, and soon to be born Beren Coon, and Kylie and Alexis Coon.

She is also survived by many loving aunts, uncles, and cousins. She was preceded in death by her grandparents, Marion “Pink” and Dorothy Coon, and Jack and Colleen Zobell.

We would like to thank all the medical professionals at Intermountain Medical Center that cared for Megan and kept her alive during the last week, as well as the individuals that provided immediate medical attention when the incident occurred.

To order memorial trees or send flowers to the family in memory of Megan Coon, please visit our flower store.