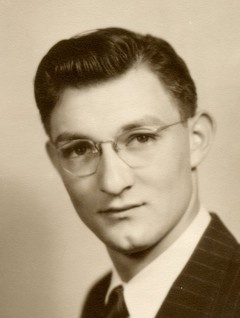 Beloved husband, father, grandfather and friend, Merrill Duane McDonald of West Valley City, Utah passed away in his home on November 27, 2017, just one month shy of his 92nd birthday. Born December 27, 1925 in Magna, Utah to George and Flora Charlotte (Sorenson) McDonald as the 6th of 7 children, Mac (as his friends called him) grew up to serve as a Private First Class in the United States Army during WWII where he received the Bronze Star.

He married his sweetheart, Norrine Henline, on July 24, 1948 in Elko, Nevada and they raised their 5 children in West Valley City, Utah. In speaking of his wife and children, Mac said just a few days before he passed, “My whole life, everything I want, is located within 3 miles of where I was born. I don't want to see more of the world. Don't need to. My everything is right here within 3 miles."

Mac worked 41 years at Kennecott as a welder and boiler maker, retiring in 1982. He worked every holiday except one during that time and instilled in is children the same strong work ethic. His son Merrill (also known as Pud) remembers hours spent in the garage working on various projects. “In the early years, you were in the garage because you had to be. In the later years, it was because you wanted to be. Dad could do anything, build anything, fix anything. He taught Gary and I to be able to do the same.”

Yet Mac also always made time for his family. For Gary, that meant evenings sitting on the front porch watching cars go by or planes fly overhead. For Carolyn she remembers, “Dad baiting my hook so I didn't have to touch the worm. And then later showing me how to put the worm on the hook so it couldn't come off.” Connie loved the trips to Yuma as an adult when “Dad was no longer the disciplinarian, worrying about the 24x7 things of his kids. We got to know a part of Dad we never knew before.” And for Sue, it was the moment he carried her down the wedding aisle (as she’d recently been injured).

His grandkids remember the smell of coffee in the morning and fishing trips, where Grandpa taught them how to catch and gut fish. From him they learned how to kill pesky garden snails and “take care of chickens” (which was his nice way of saying “beheading them”).

Mac was quick with a joke and faster with a wink. He was good with his hands—from welding and lawn care to crocheting and scratch art—and when he wasn’t making art, he was looking for it in nature. He loved rock hounding and had an extensive collection to prove it.

He made everyone around him—family, friend, stranger—feel like home and became the father and grandfather that many of us never had. He was loved everywhere he went, including the second home he and Norrine made for themselves in Yuma, AZ, where they’ve “snowbirded” for the past 32 years.

Mac was the kind of man who, whenever anyone needed anything, was out there helping them. He would drop everything to fix whatever they needed fixed, without ever wanting anything in return. He just wanted to help people. And he will be deeply missed by all who knew him.

He was preceded in death by his parents, George and Flora, his 4 brothers, Harvey, Tharel, Marshall, Wayne, his 2 sisters, Nelda and Carol, his granddaughter, Chaunté Littlewood, and his daughter-in-law, Angie (Mills) McDonald.

“No regrets,” Mac said at the end. “I lived a full life with no regrets.”

We agree. Our only regret is losing a great man too soon.

To order memorial trees or send flowers to the family in memory of Merrill McDonald, please visit our flower store.