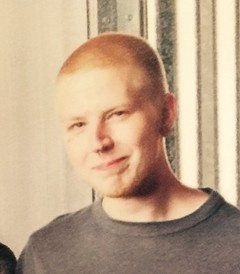 Nicc was born on April 23, 1992 to Nichole Johnson and Cameron Roper. Later to be adopted by Greg Hakanson. He passed away April 29, 2015 surrounded by his family who loved him and will miss his big smile and bright eyes. Nicc was a big brother to sisters, Dezeray, Kaylee, Izabella and brother, Cameron. He loved hanging with his best friend and cousin, Justin. Even though he had many grandmas and grandpas, his special relationship and love for his Grandpa Chuck was like no other. Nicc loved skateboarding, music and the Utah Jazz. But his favorite thing was to draw and turning those drawings into tattoos. Nicc had a huge heart and he demonstrated that by becoming an organ donor. Upon his passing he was able to save three lives. “Our hero”. Nicc is survived by his mom; both dads; sisters and brother; grandpas, Chuck, Danny, Greg, and Lindsay; grandmas, Shelley, Janice, and Gayle; special aunts, Jennifer, Kellie (Jon) and Keri; and uncles, aunts, cousins and numerous friends. Nicc was welcomed with open arms by friends, Isaac Hargis and Kolby Horton; Aunt Mo; Uncle Jerry; and great grandpas, Bob and Ken.

We would like to give a special thanks to the nurses, doctors, and organ transplant team at IMC shock trauma, and the EMTs.

In lieu of flowers, donations can be made to America First in Nicc’s name.

To order memorial trees or send flowers to the family in memory of Nicholas Hakanson, please visit our flower store.