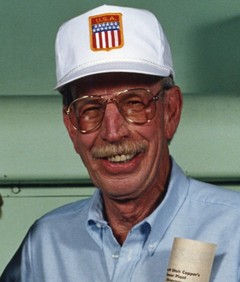 Owen passed away peacefully at his home June 5, 2015 while surrounded by his family. He was born November 22, 1924 in Ophir, Utah to Fritz Oscar and Theresa Tucker Erickson.  Owen spent his boyhood in Dividend, Utah and was raised by his Dad and three loving sisters after his mother died when Owen was seven.

Owen attended school in Dividend, Goshen and graduated from Payson High in 1942. He served his country during WWII as a seaman in the U.S. Merchant Marine, sailing on tankers and freighters all over the world.

In 1947 Owen  moved to Magna and went to work for Kennecott Copper. In 1951 he married his next door neighbor Beth Russon. They raised two good boys and as a family they spent many happy hours in the outdoors hunting, fishing and camping.

The family wishes to express their thanks to Megan, Wayne, Bill and Marilyn from Alpha Hospice for their loving care of Owen.

Funeral services will be 12 noon June 8, 2015 at Peel Funeral Home, 8525 W 2700 S, Magna. Visitation will be 11-11:50 am at the funeral home prior to services. Interment: Lehi City Cemetery. Condolences: www.peelfuneralhome.com

To order memorial trees or send flowers to the family in memory of Owen Erickson, please visit our flower store.