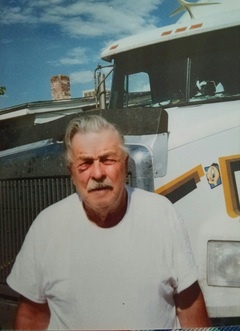 Owen L. Wolfe Sr. passed away October 4, 2015. He was born May 31, 1934 to George E Wolfe and Viona M Williams in Ulysses, Kansas. He married Jewel Madge Drain on Sept. 12, 1954; later divorced. Owen worked for many trucking companies including H.L. Young, Ralph Smith & Co., Pierce Trucking, Union Carbide, long haul and construction. He later started his own business, O.L. Wolfe & Sons Trucking. Owen was happiest when he got to go out for Karaoke. As the saying goes, “music soothes the soul” and it sure did for him. He was also so proud that he got to play a part as an Amish Elder in the movie “Saving Sarah Cane” with his daughter, Robbin Crane. Owen loved to watch old western shows like Bonanza, The Gunman, and all John Wayne movies and more. One of our favorite memories of Owen was when we were kids he would rent out the JT’s Skating Rink for us for our Christmas gift, and having the rink all to ourselves made us feel very special. His best friends were his dogs, Rowdy, Bear, and Sabel they were like his kids to him. Owen lived life to the fullest, even if it meant living in pain. He fought long and hard for each and every day he lived. He will be missed dearly.

Our family would like to give special thanks to our aunt, Tonnie and uncle, John for being there with dad through his health battles and opening their home so he could spend his final days in peace and comfort. We will forever be grateful for the love and care you’ve given our dad.

To order memorial trees or send flowers to the family in memory of Owen Wolfe Sr., please visit our flower store.