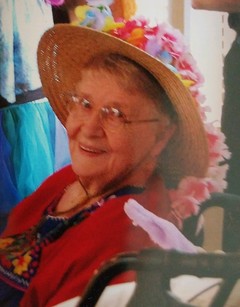 Our beloved Mother, Grandmother, and friend.  Phyllis was finally able to return to her Heavenly Father, husband, and four children on July 4 th 2018.  Phyllis was born to Harland John Henderson and Dolores Blanscett in Yakima Washington.

She Dated LeGrande Whitney Sadler while he was stationed at Fort Lewis Washington, while he trained on the Yakima Firing range.  They attended church together, and soon were in love and dating every other day.  The military got in the way, and her boyfriend was sent to California for more artillery training, then Hawaii, and briefly was allowed to return home.  Phyllis was invited by LeGrande, to meet him in Salt Lake City, where he carried her up the 48 steps of the capital building, and proposed in Memory Grove.  The he was sent by the military, to Illinois, and Abalene Texas, where they were married by LeGrande’s former Mission President.

Phyllis served faithfully in The Church of Jesus Chris of Latter Day Saints her entire life along side her husband.  Both he and she gave their lives to the church and their family.  They had eight children, four of whom died in childhood or infancy.  Once again, she is rejoicing with her good husband, who had passed on thirty years ago, and their children, Donny, Scott, Harland Hugh, and Danny.

Phyllis has many talents.  She sewed most of the clothing for her family, canned lots of foot, raised vegetables, and sang with the Silver Bells.  She loved her Scotch/Irish Heritage, was a member of The Daughters of The Utah Pioneers, and spent numerous hours compiling family history.  She was called to serve as a Family History Missionary in The West Virginia Mission, shortly after her husband’s death.

She loves the gospel of Jesus Christ, and wishes nothing more than to be united as a family again some day.

A viewing was held July 11 th in Port Orchard, Washington, where she has resided for most of her life after the death of her husband.

A grave side Service will be held Saturday July 14 th at 10:00am in the Pleasant Green Cemetery Magna, Utah.

To order memorial trees or send flowers to the family in memory of Phyllis Sadler, please visit our flower store.