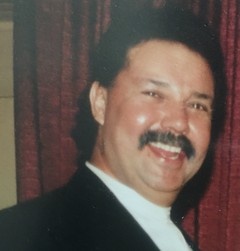 Richard passed away at home on August 13, 2016 while surrounded by his loved ones. He was born in Salida, Colorado July 7, 1943 to Edward and Antonia Torres Gonzales. Richard retired from Kennecott Copper Corp. after 40 years of service. He loved spending time with his son’s, camping, hunting and fishing. Richard was happiest when he was with his children and grandchildren. He dedicated many years to coaching wrestling at Cyprus High School where he was a strong influence on many. Richard will be dearly missed by all who knew him.

A heartfelt thanks to Jane MacPherson, Dr. Prosthofer, Anita, Ricky and all the staff at the Huntsman Cancer Center, the nursing staff at IHC and St. Joseph’s, for their loving care.

In lieu of flowers please make donations to the Huntsman Cancer Center.

To order memorial trees or send flowers to the family in memory of Richard Gonzales, please visit our flower store.