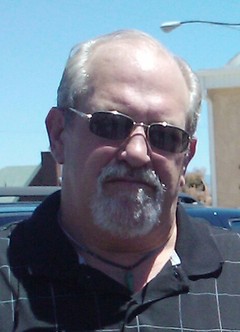 Lumpy left us November 14 after losing the only fight I know of and it was to cancer. He was surrounded by family and friends. He was born in Salt Lake, UT on August 23, 1947; parents Richard & Joyce Thomas. He was raised in Magna. He attended Cyprus High School. He joined the army and served two tours in Vietnam. Returning home to his family and friends. Lumpy lived life to the fullest. If you asked him how he was he would say "Large and Lovely." Lumpy cherished his family and was a big softie with kids. He loved all his family no doubt, but he had a special bond with Michal and Erin Wolfley, and (Bubba) Ricky Jensen. Those three had a special connection with him. He also had an unbreakable bond with his baby sister Joann Thomas Jensen. He was constantly making new friends from all walks of life. Like his best friend of over 50 years who is calm, quiet, and reserved (Bear) Michael Privett. On the other side of the fence his husband-in-law where rules were never in the program Jerry Martin.

Special thanks to Johnny and Joyce Leach for being there for him. I would also like to thank a few people from Mt. Olympus Lisa, Peggy, Jennifer and his new friends Jerry, Nick, Tim, Charlie, Kim, and Kevin. Also a big thanks to everyone who stuck by Lumpy’s side you made his life amazing and memorable.

To order memorial trees or send flowers to the family in memory of Richard Thomas, please visit our flower store.