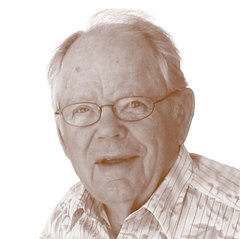 Robert Malcolm Ord, 90, a gentle man and spiritual giant, passed away on Friday, February 19, 2016 at home in Magna, Utah, after a short battle with brain cancer, leaving behind his large and loving posterity. He will be remembered by all for the twinkle in his eye, the bounce in his step, and his easiness to love! Though he always considered himself shy, people were drawn to his personality; he developed many close friends, near and far, to whom he was devoted until the end.

Bob and his twin sister Barbara were born on May 13, 1925 in Baker, Oregon to John Byron and Annie Claire Ord. He loved his little town of Baker and returned often, always speaking of it fondly. He fought in the US Army in France during WWII, earning the Bronze Star Medal for heroism in action.

After serving an LDS mission in the Eastern States, he attended Brigham Young University, where he met Donna Lea Sargeant. They were married on June 4, 1951 in the Salt Lake Temple, later settling in Menlo Park, California. Together they had five children: Brigham, Daniel, Sandra, Sue and Cherie. Bob lost his sweet Donna to a tragic car accident in November 1965. He became a devoted single father, supported by a strong community of family and friends. After nine years, he fell in love again and married Janice Kay Cutting on May 24, 1974. He gained three more children: Jim, Candie, and Connie.

Bob’s professional career began as a US history professor at BYU. He later became a general contractor and master craftsman, working in the San Francisco Bay Area and later in Salt Lake City, overseeing the construction of more than 200 buildings by the end of his career. However, his love of US history never faded and he avidly studied it throughout his life. His other passions included BYU football, tending to his fruit trees, sharing his harvests, water skiing, and church service. Everyone who knew Bob knew he loved the gospel. He served as a missionary, stake mission leader, high councilman, bishopric counselor, Gospel Doctrine teacher, and devoted home teacher.

Bob’s lifelong priority was his family, rejoicing in each new member, whether through birth, adoption or marriage. He was always happiest when all were together, and he worked hard to establish connections between his posterity and past generations. In that effort, he wrote and published an account of his experiences in WWII, and memoirs about his life with Donna. He will be remembered as a devoted family patriarch and a dedicated servant of the Lord.

To order memorial trees or send flowers to the family in memory of Robert Ord, please visit our flower store.