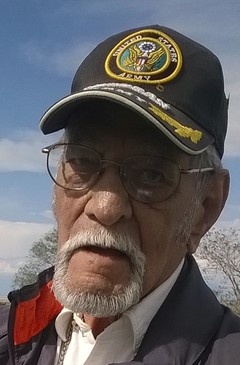 Roberto A. Martinez returned to our Lord November 15, 2016.  He was born on November 20, 1922 to Jose Angel and Refrjio (Ruth) Archuletta Martinez in Blanco, New Mexico.  He married the love of his life Maria Vallejos on March 28, 1946.  Together they had 7 sons and 2 daughters.

He served with Honor in the United States Army from January 21, 1943 to February 18, 1946 during World War II, stationed in the Philippines.  Roberto was a very talented artist.  He mastered the art of carving.  When he saw a piece of wood he could turn it into something beautiful from animals, a crucifix or a wooded rosary.  He had a wonderful sense of humor.  He also was a member of the Spanish Choir at Our Lady of Lourdes for many years along with his wife Maria and his brothers and sister-in-laws.

Preceded in death by his parents, 5 brothers and 4 sisters.  His precious wife of 60 years Maria, sons:  Raynel, Johnny, Michael and Mark.  His daughter Patricia Ann, and grand children Bobby and Patricia.

Our family wants to say THANK YOU to the CNS Hospice for the wonderful care they gave to our dad.  And all the marvelious doctors at the VA Hospital.

To order memorial trees or send flowers to the family in memory of Roberto Martinez, please visit our flower store.