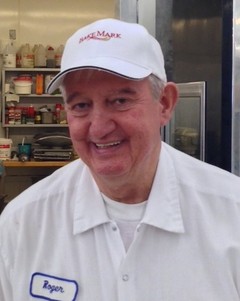 Roger, owner and master baker of Roger’s Bakery in Magna joined his daughter Cindy in the next part of his journey in eternity.  He passed away at his home from GBM IV cancer on November 28, 2014. Roger was born July 9, 1945 in Montpelier, Idaho to Lyle and Mildred Hayes.        After graduating from Montpelier High School, Roger entered the Army Reserves. He married his high school sweetheart, DeLone Smith on November 13, 1965. They were later sealed in the Salt Lake Temple. Before opening his own bakery, Roger worked for The Royal Bakery in Montpelier, Albertsons in Logan, Tooele, and several Salt Lake locations.  He also worked as a baker at Harmons. Roger opened his first bakery at Mr. J’s in West Valley, then Bobco’s and Food 4 Less. In November of 1986 he moved his bakery to the Reams Grocery Store in Magna a community where he was proud to both live and work. Roger’s generosity and talent was felt across the community in its churches, schools, sports teams, and even its children whom he would often give a donut or cookie as they visited the bakery.  He supported and loved Utah’s swimming and water polo community.

The family would like to express their thanks to his many friends, his bakery family, his swimming family and the community of Magna. A special thanks to the staff at IMC, University of Utah Rehabilitation and IHC hospice team for their prayers and love.

In lieu of flowers and in order to continue Roger’s legacy of helping those in need, please consider making a donation at any Cyprus Credit Union in the name of Roger Hayes’ ”Dough for Kids Scholarship” Fund. Online condolences: www.peelfuneralhome.com

To order memorial trees or send flowers to the family in memory of Roger Hayes, please visit our flower store.